I could resist no longer. I was mentally designing headwraps- a standard diversion of mine that never gets anywhere near needles- all week. I was looking at Knitty Calorimetry as a possibility and then saw this and these and..well, at 6:30 am yesterday I was already into the short rows. 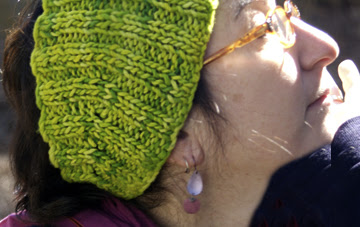 A bit of knitting then , a few minutes mid day and some rows during a wait in the evening and it was done. If I had to guess, under 90 minutes of knitting and I'm not all that speedy.

I was thrilled with it, I had a cool button that matched, I put it on.
Owing to my ethnic inheritance, most headwraps that look cool on others scream BABUSHKA on me. And not in that good waify gypsy way . 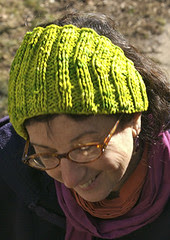 My 13 yo son upon seeing it said " No...no. That's really not good. You look like a...uhhhm...look in the mirror. Don't even bother finishing that hat." When I told him it was finished, and would he take a few photos of me wearing it so I could see, he agreed. As long as we did it in the backyard, away from humanity.

Me? I like it as a v1. I'm thinking maybe a colorway other than "Violent Spring" (just kidding, its Key Lime) would be a better choice for me, with less short rows so it was narrower. This being a heavy worsted yarn, and my head being smallish, I followed the experience of others , casting 8o stitches on size 8 needles and cut back my repeats to 8 short rows of decreasing and 8 growing back, about half of those on the pattern.

Its a potato chip of a knit. Tomorrow all the yarn stores around here have super bowl sales, and I'm thinking Noro, on size 7 needles, something subtler in tones and smaller in size. Meanwhile, avert your eyes if you're 13 and see me coming.
Posted by gale (she shoots sheep shots) at 12:21 PM

It is a bit bright, but I like it. Of course, I'll be living thru you as I've got a large head and know better than trying anything like that after the dreaded panta mistake. o.0

I love it! I'm going to put mine on right now!

Mine came out rather, er, big -- once the cold weather is done I'll probably frog it and knit it again much smaller. In the meantime it's keeping my ears and head warm in the -20˚ temp. Can't complain.

I love it! I'm totally hooked on these non-hat ear-warming solutions. Very chic!

And, of course, I love the way you caught the essence of being mom to a 13 year old.

Yup, I had the babushka problem too. I'm pretty sure it was the dark colour on my dark hair. You might want to re-think going too dark on the yarn...

I thought 13-year-olds averted their eyes if any adult came near....

I think it looks beautiful!

I love it. It is beautiful and your black hair really shows off the yarn.
Ok, so slightly babushakesque, but I agree if you make it a little smaller, it will be perfect.
Noro sounds divine!
Holly

This is on my to-do list (as are about a million other projects) it's so cute...I love your colorways!