focus on the sweetness

2012. What year of highs and lows; of complex problems and simple happiness, of triumphs, and of losses.

Annotated. Because who doesn't have a few more words on the subject....
My fellow knitters & crafters! Unless you're casting on a chunky quick project*, or demonically speedy, it is time to put down the needles and step away.  Shift the focus.  A promise of the handmade, perhaps? 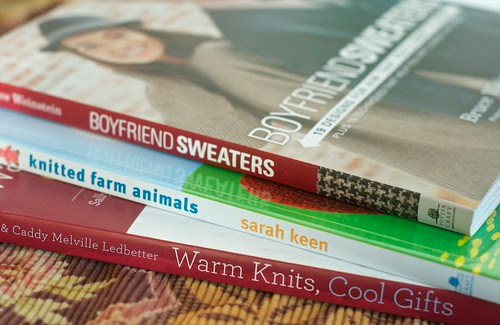 These three from PotterCraft. They do good books. **
So you're short a finished project?  A bookmarked page with a promise of the item in January is a loving gift.  Infinitely preferable to snarling at your dear ones "Don't even TALK to me, dinner, uh NO,  I NEED to get this done...."***
To help you along , here are reviews from my opinionated self: 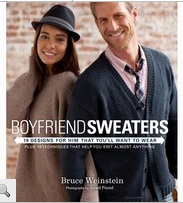 Bruce Weinstein**** totally nails it in his new book, Boyfriend Sweaters. He delivers  on his premise: rock solid designs for guys that anyone would want to wear.  Including straight non-metrosexual guys.  And you. And, um, me. All sized for, and modeled by, both genders. 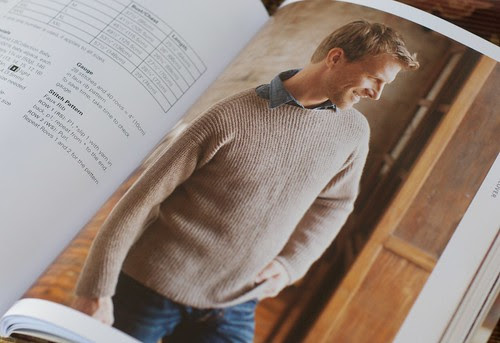 This is the rare knitting book that keeps disappearing in my house.  I've had "wouldja make me" requests from it, across 2 generations and two genders and their friends, ages 17-55. That's a pretty good road test right there. The sweater above was 1st choice from 3 people.***** 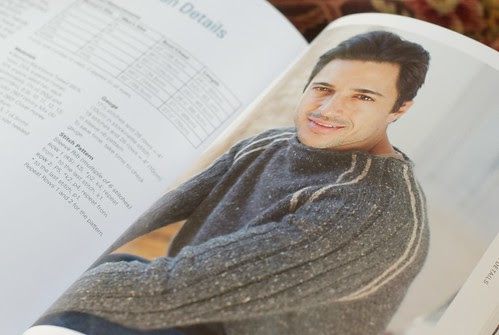 I'm all over this one. Maybe I'll make it for Dave and then steal it sometimes. 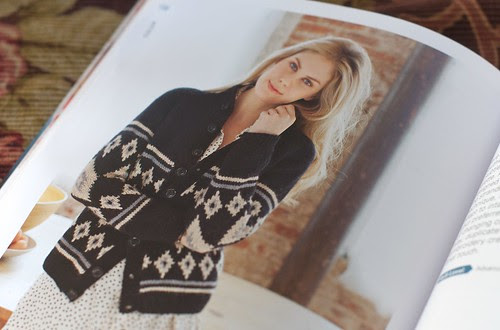 Here's another one. Win-win-win. Props to Jared Flood's photos, too, for the commerical yet natural catalog-ish appeal. 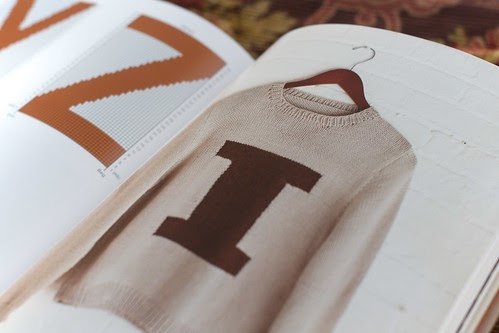 I hate knitting fitted sleeves for myself but I really really want a Z sweater. The whole alphabet is charted. Love it 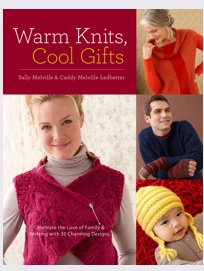 Warm Knits, Cool Gifts from Sally Melville and her daughter Caddy Melville Ledbetter also gets my thumbs up.  It has a broad range: baby knits, accessories, sweaters, xmas type things, cute kid knits, anafghan. A keeper, but I have to admit, it's been here most of the year, and I haven't knit anything from it.
Then I offered Giuliana , who appreciates my knits in the most endearing way, a sweater of her choosing****** I pointed her at my shelf of knititng magazines and stack of books. 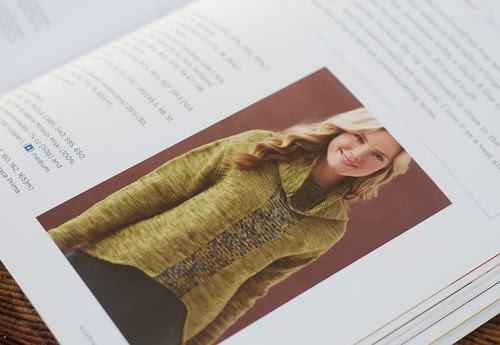 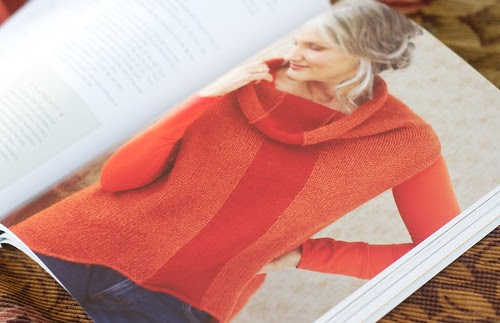 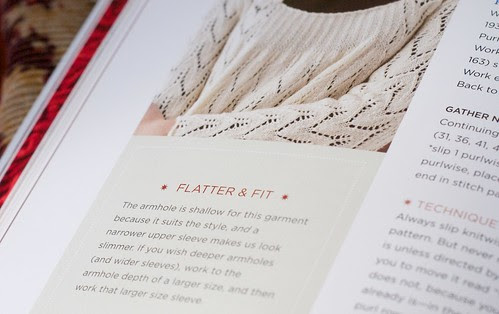 Extra snaps to the book for the Flatter & Fit comment boxes along the way.

Next category: handknit dolls & toys. Love 'em. Almost never make'em. When my fabulous niece Ariana joined me at Rhinebeck this year, the one thing she wanted most was to cast on for stuffed animals, her fave kind of knit. So, I have the perfect gift for her: 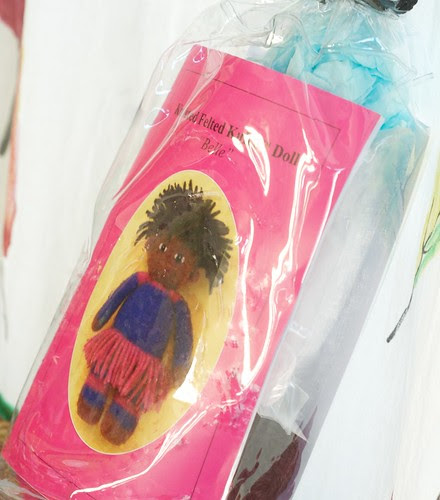 A Kuku Doll kit. (This is Bella).  When Lisa , of The Creative Warehouse had me teach last month, she brought a bunch of her dolls as subjects. They are adorable, and come in every ethnic mix imaginable. 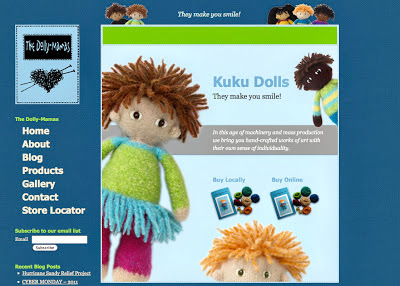 If you have a multiracial family like mine, you perhaps have spent some fruitless hours looking for sweet non-caucasian dollies?  Lisa and a partner  have a very cool social initiative business, with the knitted/felted dolls available for purchase, or as kits & patterns to make them yourself.  Read more about the Dolly-Mamas here.
Then, there is this new book 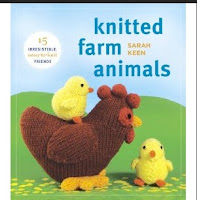 Knitted Farm Animals by Sarah Keen
There's a lot to like inside. The animals are not twee, in fact some are downright soulful. 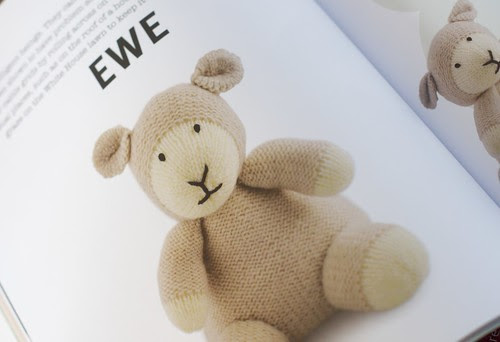 If I were a good granny, I'd be knitting this for Zoe. She loves her some sheep. (Me? Responsible? M-a-a-a-ay be). Instead, the book'll go to Ariana as well, and she can be a good cousin.******* In case you're wondering if I've slacked off the gift knitting, compared to other years, the answer is, sort of. Details when all done and delivered. I'll show you what I'm knitting today though. It'll be done later, I'm sure. 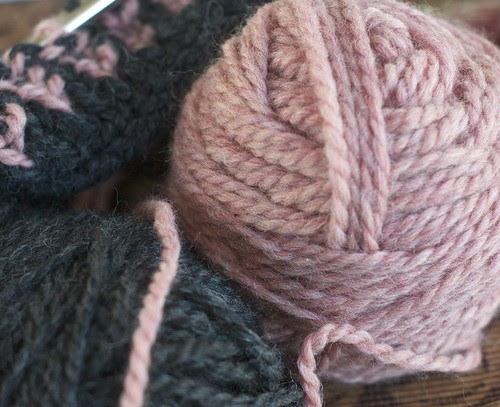 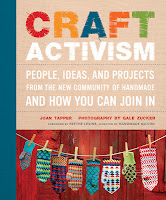 ** My last book with PotterCraft, Craft Activism  still makes an awesome gift for anyone who appreciates handmade. (Just saying).  They sent me the books above, for review.

*****Unfortunately, I had to trot out the "nuh-uh. not knitting sweaters for anyone on size 4US needles" clause..

******As long as the pattern called for size 7US or larger needles. See above.

*******Is this offloading guilt? Maybe. Works for me. What's your strategy?

gifting on the 1 trick pony

I had this notion I'd do a series of posts with good gifting ideas all month. Not because I 'm a gifted gifter. But because I get a lot of books sent here for review that you should know about, and I meet a lot of very interesting artists and designers. Who you should also know about.I'll get to them....
. 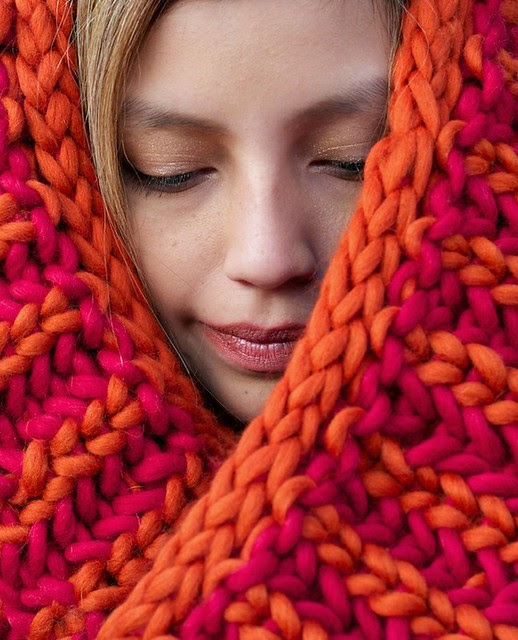 Meanwhile I am just a bit obsessed by Decibella, (more about my pattern in the last post.)  Put together a super quick knit that lets you play with colors, and throw gas on that fire in the form of my dear friend &  knitting hero Kay of Mason Dixon Knitting . She not only cranked a beautiful Decibella herself one night this week (scroll down in that link to view it and read her eloquent description of why the stitch entertains) but has engaged me in  tweaking-the-design alt yarn convos that have utterly blotted out any other gift knitting or blogging ideas. One track mind and all that! Decibellas for all this year! 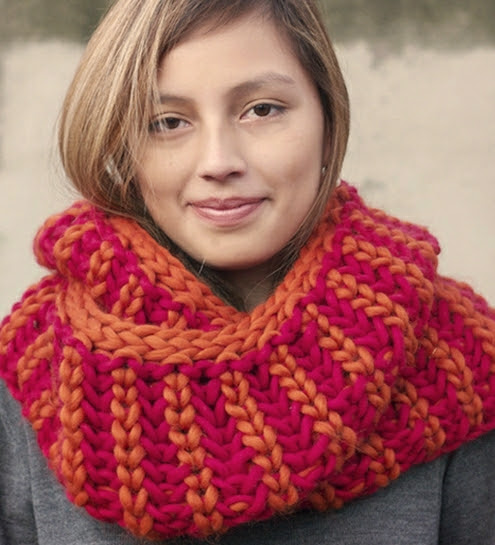 So, tata and toodle-ooo I am off to my LYS to get me a couple of skeins of Malabrigo Rasta, or maybe Peruvia Quick or Misti Alpaca Chunky...all nice substitute for the Cascade Magnum shown here.
Let me suggest a do-not-miss new book you might want to gift yourself (or another knitter) with: Cast On, Bind Off: 211 Ways to Begin and End Your Knitting By Cap Sease 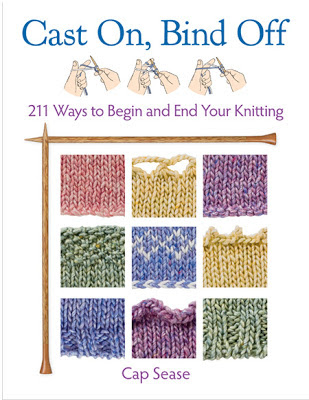 Yes you read that right, 211. The book is fabulous. It's a MUST HAVE. You may not recognize Cap's name, but you have been knitting her designs from Green Mountain Spinnery for years. The books is spiral bound, so it behaves itself while you reference a well-organized collection of bind offs, cast ons and edges, with clear color photos, and easy-to-follow illustrations of hands executing the steps in each manueuver. It's super useful  for BO's and CO's you may not use often, or that  solve a problem or add a little something extra. Her breadth is mind-boggling.  It is just right for looking up an icord cast on or bind off...which comes  in handy....when you knit a Decibella. (see what I mean? neigh!)

Meet Decibella, a cowl that makes itself heard.
It's  a chunky, stylish, reversible cowl in a quick-to-knit variation on Shaker Rib. You can probably make one this weekend-it's that easy. Kind of fun, too. 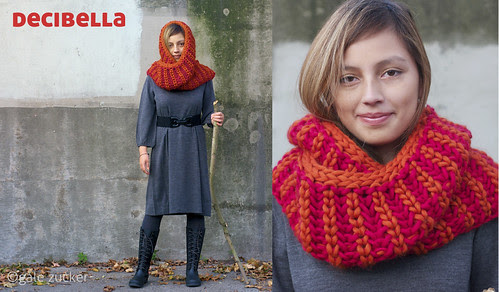 As I mentioned in my last post,  the muse knocked me upside the head to knit a big orange cowl as a prop, in a stitch that seemingly has no official name,  for a photo shoot. Once we finished photographing, I felt like it had potential, so I went ahead and reworked it and wrote her up, and walla! A published pattern.* 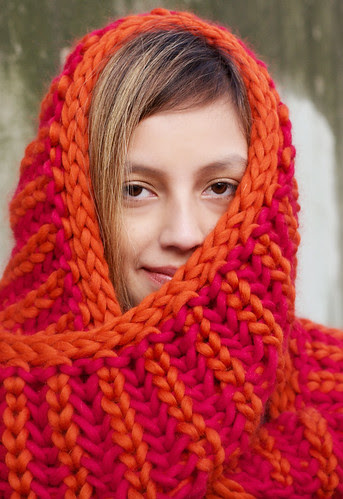 I'm particularly happy with the applied icord edge. Why have I never fallen in love with this finish before? I watched Kay Gardiner  icord around a very large  Fussy Cut blanket with mindblowing speed and dedication.  It looked spectacular. Now, I get it. 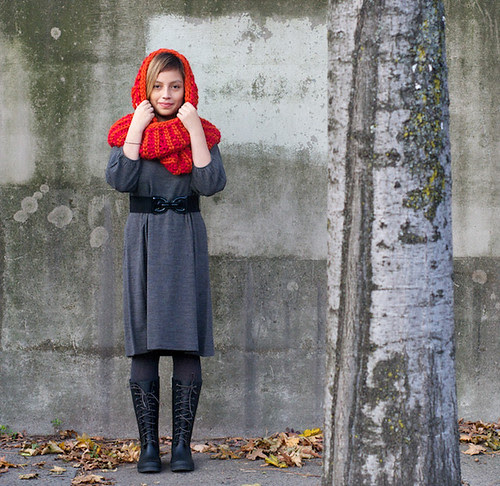 Both the pattern stitch, which uses some K1 below action, and the applied icord are easy to learn, and they elevate the piece to something a little special. Want to try it yourself?

I'm itching to make another Decibella this weekend, too, in a lighter weight yarn- maybe a garden variety bulky or even heavy worsted- and maybe do the icord around both the top and bottom edge. ...or it could be worked as a smaller, closer fitting cowl that stands up around your neck ...or maybe use an ombre for one of the two yarns.....

welcome to my process (with a query)

It started  simply enough, and it had nothing, nothing I tell you, to do with knitting.
I'm in a photography exhibit early next year, at a lovely gallery, with some respected photographer friends. I wanted to create a new image for the show, to suit a theme. So, I let a bunch of ideas roll around unattended in my brain. Then, just before the deadline ,  inspiration struck. It demanded a large, assertive prop. Nothing felt quite right. At the  very last minute I decided to knit the prop:  a nice loud large cowl. 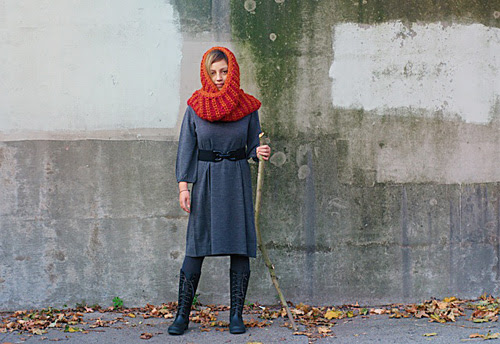 I’ve named it Decibella. A cowl that makes itself heard.
The photo shoot happened, see out take, above. I made my deadline. All's well and good, right?  But then?  I ripped and re-knit the cowl, finetuning, fixing some awkward design elements. Whoosh!  Suddenly it is all about knitting. I figured I'd write up the pattern.  I'd worked out the kinks, it's pretty awesome in its assertiveness. Maybe someone else will want it, too.
So here's my query:   It seems I used a pattern stitch that doesn’t have a name. At least, not one I can find. It looks brioche-y but I can assure you, it's not.  I thought it was Shaker Rib, but no. Here ‘s the only place online  I can find the exact same stitch, and it's a Craftster.Org post from 2004 in which the  the knitter says she unvented it. So, what is this stitch's name?

I am skeptical there's actually anything new in stitches. That's one of the things I find so cool about knitting. You think you just made a fresh new design in tote bags? Nah. A sister in Greece sitting on a rocky island used the same stitch combo 100 years ago. I know I used a variant of Shaker Rib in the round, that much I can tell you. Check out that link , and if you know what it’s really called,  help me, please.  I’m admittedly a few volumes short
I'm looking forward to the answer to this mystery.  And if you also come up empty-handed? Just make up a name. I bet it'll be better than any I've thought of. Two Color Double Half Fishermans Rib anyone?
Posted by gale (she shoots sheep shots) at 9:26 PM 12 comments: