Carnaby Kid behind the scenes 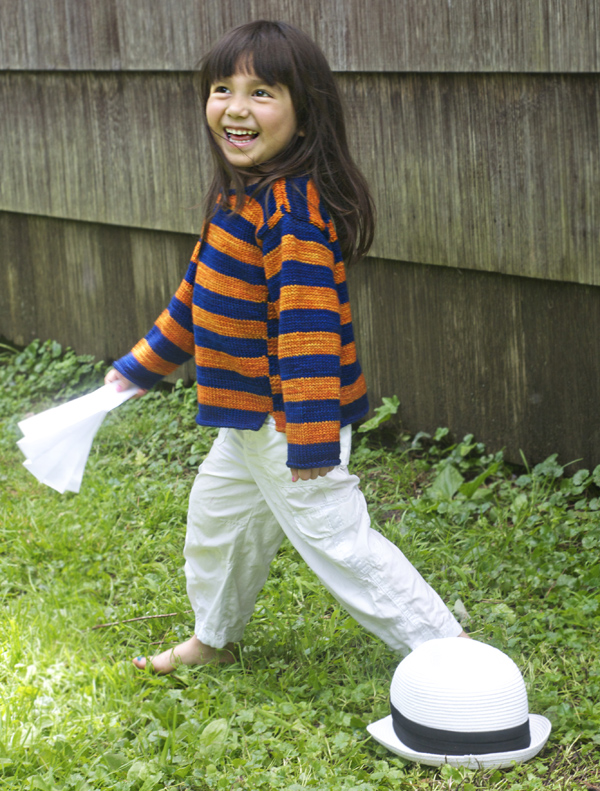 This morning Lori Versaci of Versaci Knits released her adorable Carnaby Kid sweater. It's, the tiny version of her fun adult Carnaby Street design*. A few weeks ago,  I met Lori for cocktails after I taught  at Pins and Needles in Princeton. Between gin drinks--very good gin drinks-- she tucked the sweater into my bag and asked me to shoot it on Zoe.  The drinks were so good, we didn't quite discuss details--but it was obvious to me that we'd made a winning model:design pairing. Really, no bias ;-)  This past Sunday, the shoot finally happened. 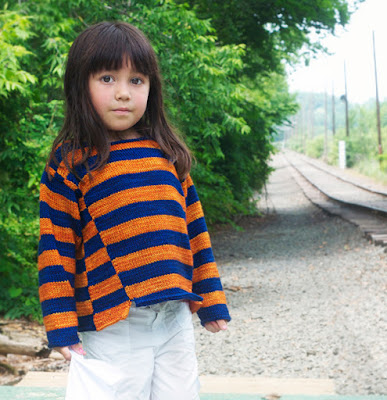 Official version, above. Serious style! Thought you might like to see what else went on when I slipped the stripey wonderfulness onto the 3 year old with the freshly trimmed bangs. Sister Lulu had come over for pancakes. For the bazillionth time, she was drafted into helping with reflector/diffuser duties. Sister knows how to throw some shade, on demand. 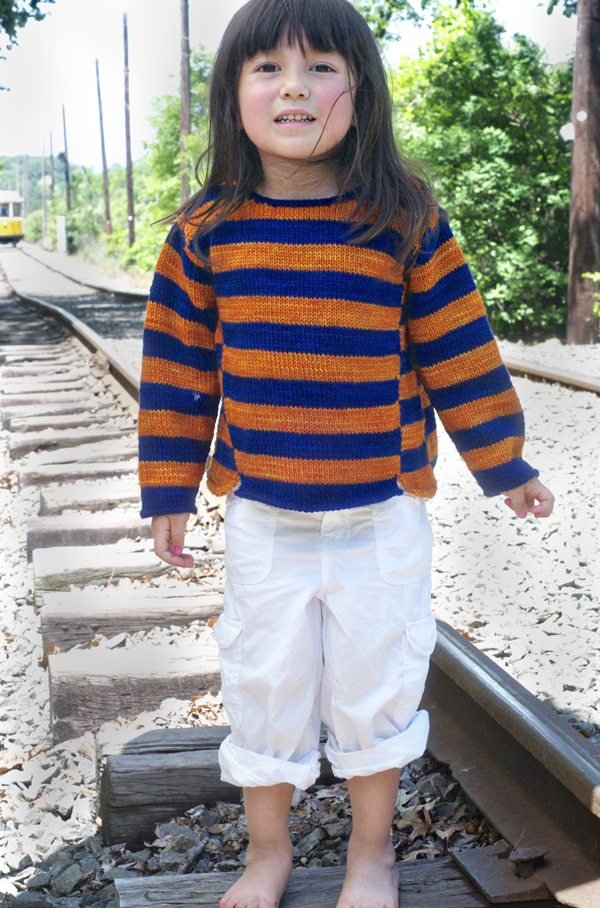 We'd been shooting for 10 minutes in increasingly sticky weather by the tracks at the end of the street when we heard the toooooooot toooot of the vintage trolley approaching--do you see it in the upper left? Our model got a little excited. She's been wanting to ride the "choochoo". 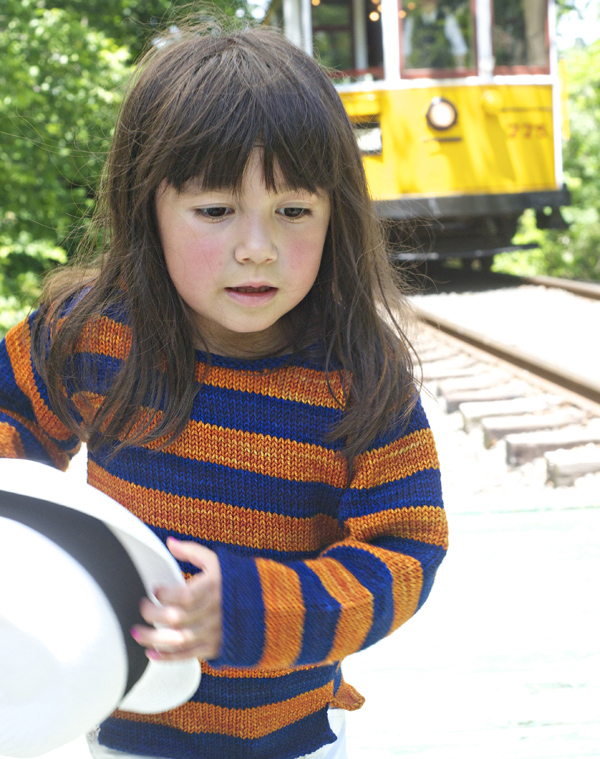 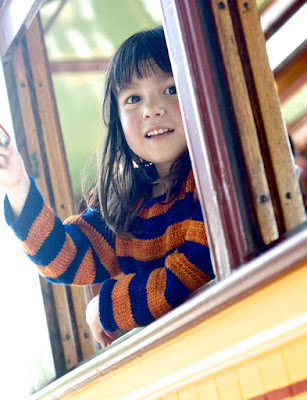 A split second later, completely unplanned,  barefoot and with camera in tow, we're trolley passengers. We're breezing through the wetlands it crosses, spying egrets,  and nesting osprey with their babies, enroute to the ShorelineTrolley Museum.  My neighborhood adds the local color for tourists  We didn't let them down when we boarded, unfolded reflector flopping with us. 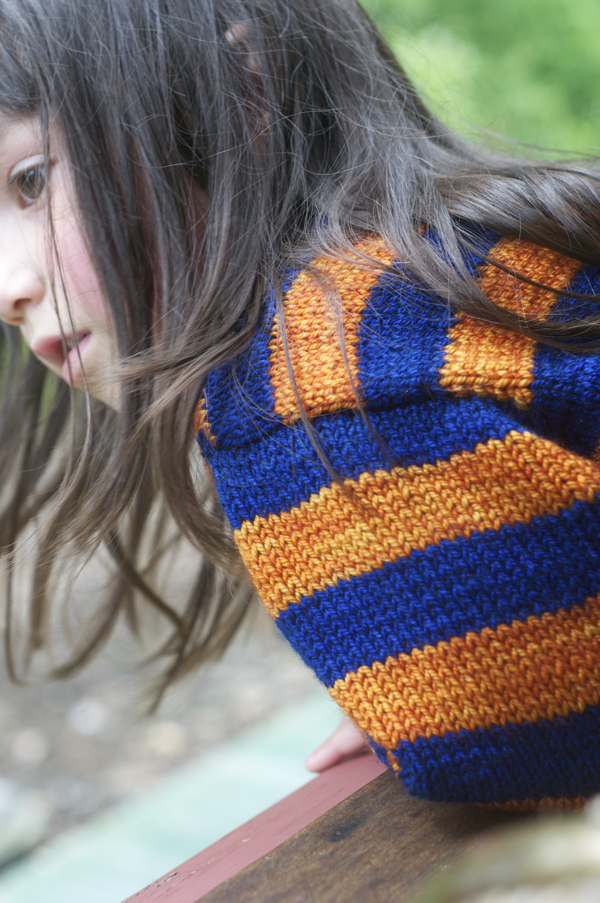 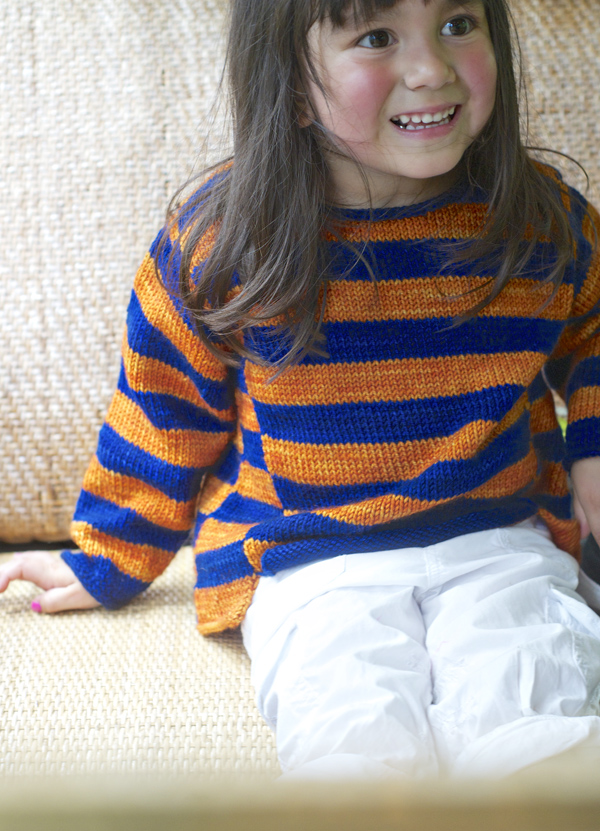 Wicker seats! People used to ride with civility. The wool sweater was a little warm..but so dapper. 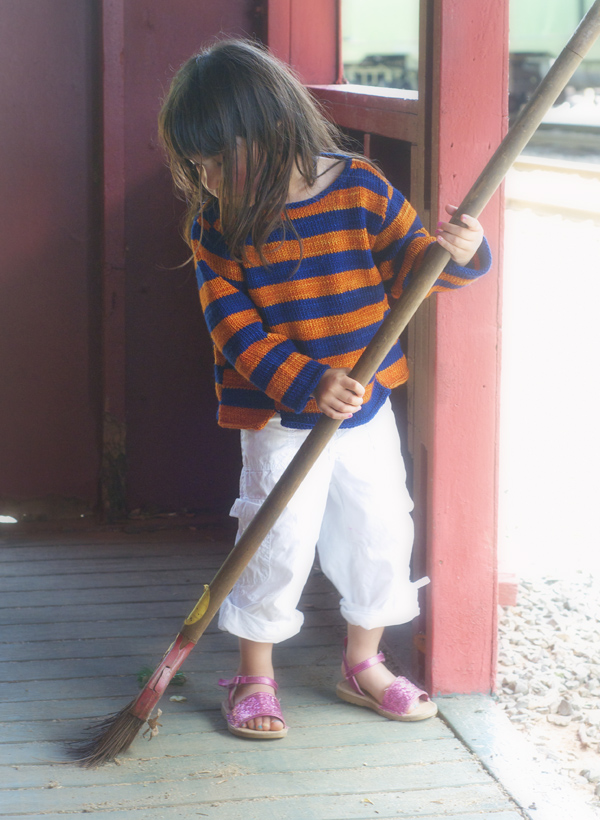 The trolley makes a stop at the car barn out in the woods. Visitors see the old subway cars and trolleys under restoration, and learn commuter train history. We skipped that part while our sweater model put on her sparkly sandals and played house in a vintage trolley stop shelter. 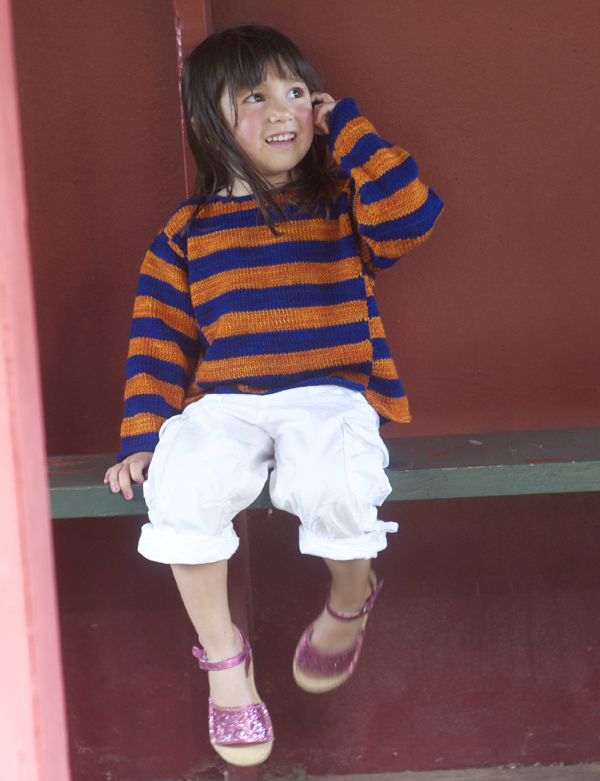 Waiting for the whistle to all on board again. 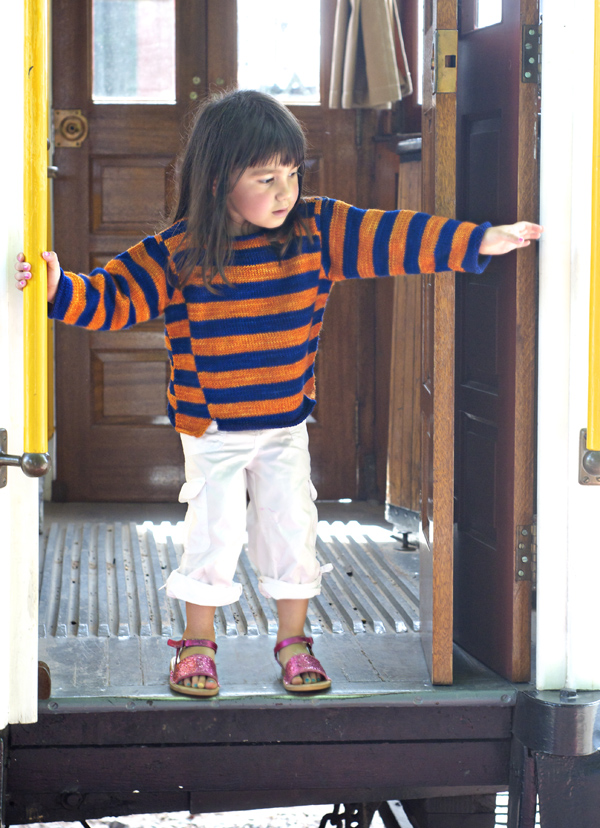 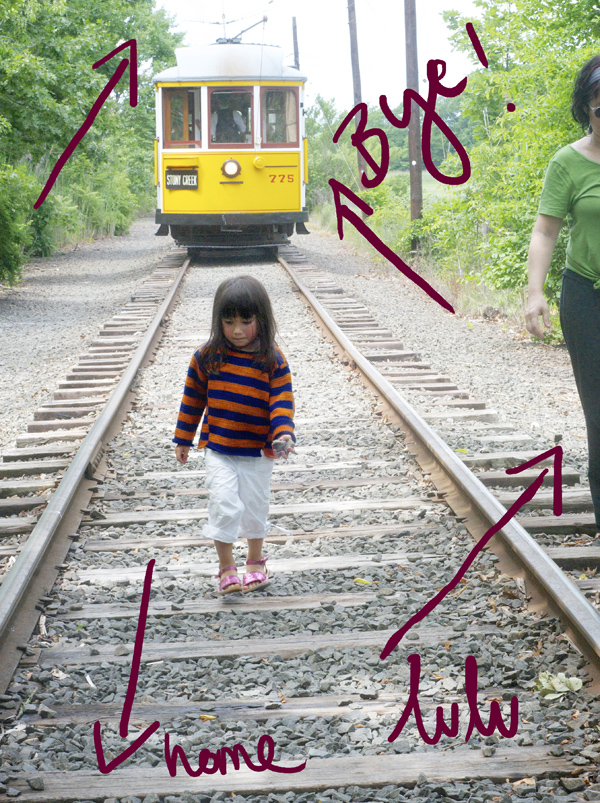 We rode back to our street. It's the turnaround spot for the trolley.  As we headed home,  the trolley went the opposite way. Not that you could tell without a caption.  I just couldn't post this one without adding arrows--so ominous! 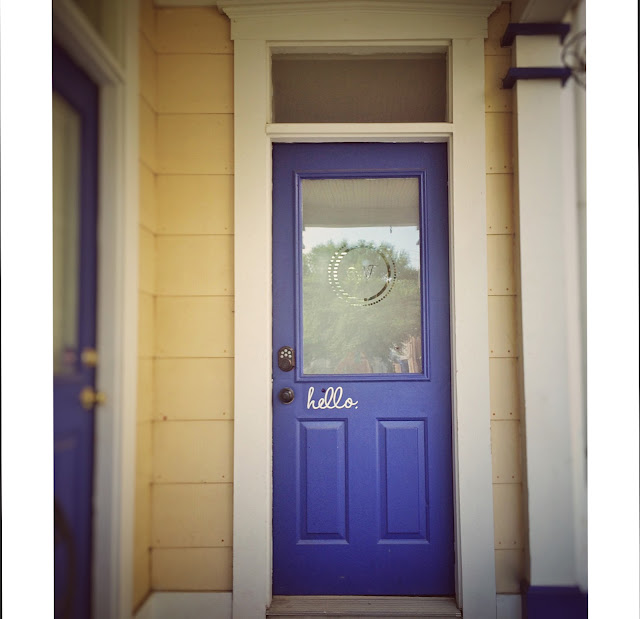 Door to the sweet airbnb house I stayed at  in Columbus for TNNA this past weekend.  TNNA is the annual summer trade show for the yarn & knitting industry, this year in Ohio. Rest assured that the knitting world is alive and well...and wow there's some nice yarn coming to a LYS near you. For example the gorgeous new Swans Island All American sportweight yarn.  Maybe I am biased, I photographed the  new pattern grouping that debuted for the yarn - I (jokingly) call it  MY LINE.  I love seeing images almost life size in the booth, from a freezing cold shoot up in Maine last January. Really excellent patterns and colors- so new they are not even on Ravelry yet. I'll add links as they appear because you will love them.

The wonderful Clara Parkes caught me looking happy with them. 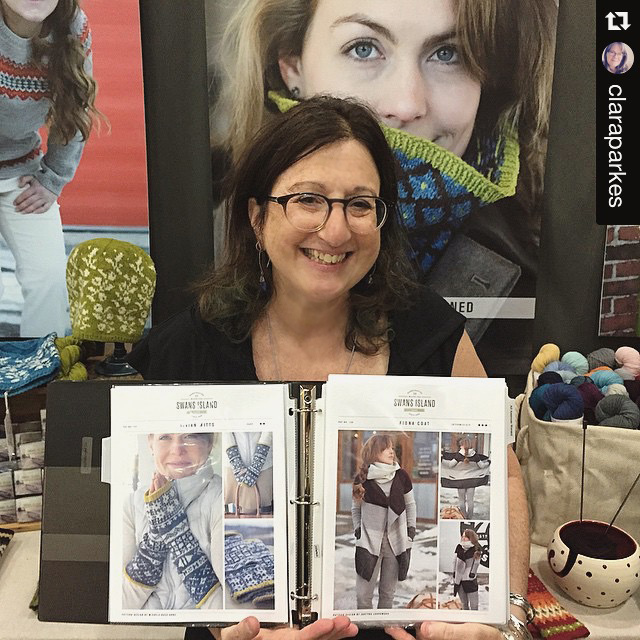 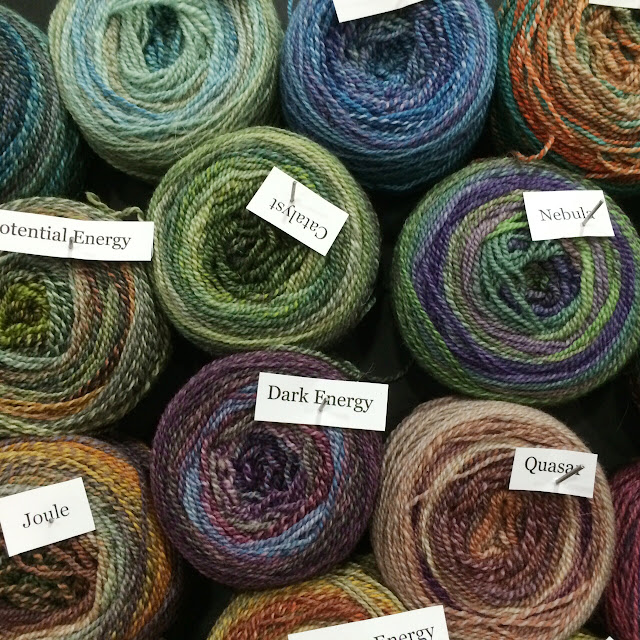 More loveliness from Feederbrook Farm, in northern Maryland. They do gradients. striping skeins that look handspun--and have a yarn & fiber  CSA. Nice folks. Can you tell she is a former science teacher?  They offer some cool classes, too. So many good people in this industry.

It was fun to see friends & clients and of course to be immersed in materials I love to work with-but it wasn't a vacation. We did a small photo shoot, many meetings, some work with co-authors on a book that is moving along at a trot. And there's the long established irony of working at a knitting event that leaves you precious little time to actually knit! I brought along what I think of as my slo-mo Cladonia shawl. One of these days I'll finish it. 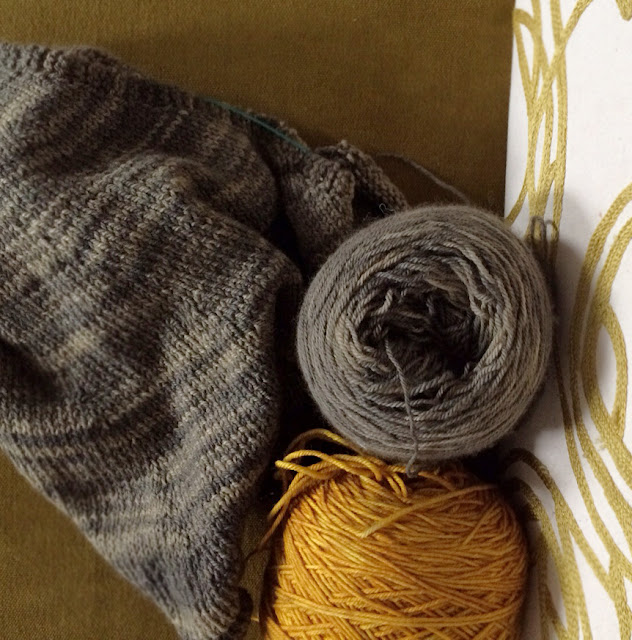 I kind of like how it fit into our airbnb's living room seating though.


* out of nowhere this movie popped into my brain. I bet it would be a hoot to watch.