My new book Craft Activism, with Joan Tapper, is released today! I am celebrating my own little holiday. It is so odd, when you are working on a book, you live with it for months & months.  I know it backwards, frontward and inside out. I forget it's also brand new, and a joy to watch it received in the big wide world. New to everyone but the many many artists & friends & colleagues and knitters & loved ones who helped work on it. I have to make a Takes A Village post to properly acknowledge all.

To mark the occasion, I cast on for one of the most accessible yet showstopping patterns: Fussy Cuts. It's a fabulous log cabin based blanket designed for us by Kay Gardiner & Ann Shayne of Mason-Dixon Knitting. It's one of three pretty wonderful projects in our Crafting for a Cause section. The genius of this one is a) if you do it in a group, each knitter only need buy 1 skein of Noro Silk Garden b) it is so gorgoeus it could be a special gift or a super fundraiser raffled off  and c) it is the sort of portable, addictive knitting one gets lost in . Wait did I mention there is  no sewing for assembly involved? And there's a little twist in how you use the yarn and proportion the log cabins. Rather genius, it is. 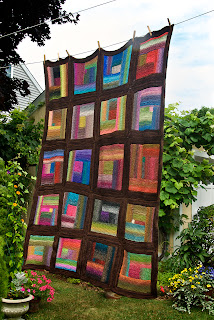 Fussy Cuts, from Craft Activism
But that's what happens when you associate with brilliance. Speaking of that, I'll take this opportunity to specially thank Maryse Roudier.   She offered to be our book intern but is so much more. She helped us in every way-from brainstorming, spreadsheeting, scheming, yarn sourcing, color opining, photo assisting, mitten modeling, chicken wrangling, reflector holding, test knitting & crafting and being an all around friend. Mwah!
She's also working on one of these blankets. I have full faith it'll kick ass.

ps. And what is a book without its own blog? www.CraftActivism.com
Posted by gale (she shoots sheep shots) at 12:13 PM 10 comments:

With all the to-ing and fro-ing and gatherings lately, there've been some good eats. For Leo's 21st birthday barbecue, the requested cupcakes were ones I've been making him for years: dark chocolate with blue buttercream frosting.

And sprinkles. OF COURSE.
The party was just days after the hurricane. We hastily tried to clear the yard, then gave up and just sort of piled downed branches, debris, tools, ladders and saltwater shriveled plants on the sides. We stuck tiki torches and a tent with banners in the area we wanted you to look at. Distraction! It worked, in person but wow the pictures look like we were living amongst wreckage. The food and beer helped  though. Did you know you can buy microbrew "logs" of beer, like mini kegs? Such a very good idea,  from my package store friends.

Leo's  Peruana girlfriend Giuliana taught me how to make ceviche from her family recipe. A lot of work but to. die. for. Served traditionally, with sides of corn on the cob, avocado, limes, and slices of sweet potato.

I had to make a stop at this place while I was up at Fiber College.

When I'm working /traveling alone in Maine I go straight for the good stuff: lobster stew with corn and local beer.  No work, no carcasses to dispose of. It is pretty much butter, milk, lobster, salt & pepper & paprika. What could be bad (other than no green vegetables in sight)?

#1 Fiber College was not at a college. Astrig, the artful soul who started it 5 years ago, uses the less popular definition of the word,: a. A body of persons having a common purpose or shared duties. It is at a spectacular 40 acre campground on Penobscot Bay, with gardens and art everywhere you turn.

#2 I  should have left time to take a class and to just hang out more. It was my first time, and I wasn't sure what to expect. Maybe a slightly ragtag joyful gathering, seeing as it was held way up in Maine and I was staying in a tent, I thought. Better plan to keep busy.   Nu-uh! It was super well organized, with Astrig & Steve's team setting up tables and chairs for me (hold it, I need to write that again for me), in advance. No rag, no tag. Many classses I would have liked ot be part of (Andean embellishments! Dyeing! Hooping!) There were volunteers helping,  and class lists, and most importantly, beautiful teaching spaces. The Artist in Residence, Mary Jane Mucklestone, even had an  canopied lounge area with sofas and a table and teapot so you could just go shmooze with her and bask in her talented but down to earth aura and have a friendly visit in her outdoor den. I needed more shmooze!

# 3 I know this one but I always forget: we craft for so many different reasons.  Sarah, a student in one of my classes, is a devotee of hyperbolic crochet and makes these organic pieces, mostly as conversation starters. She loves the connection of math and art that is going on, and she loves to have interesting conversations about it with strangers.  She found this Romanesco in the local market. We are convinced that the same math equations that allow the hyperbolic crochet to grow as it does also governs the veggie. (Can you tell I share her fascination if not dedication).

Working with different backgrounds in one of my classes. Love these gloves.

Since my last post, I marched in a costume parade, threw a successful 21st bday party in a hastily reclaimed post-hurricane backyard, camped oceanside in Maine, tapped a keg for the first time since I was 20, learned to make real Peruvian ceviche, taught at Fiber College, made wonderful new friends, set off a midnight car alarm in a tiny sleeping town, drove a lot, observed the annual last-full-moon-of-summer neighborhood skinny dip, flew to Minnesota, saw old friends & family, met more new friends and more talented indie designers, taught at The Creative Connection Event/BlogHer Handmade, levitated from caffeine consumption when Starbucks sponsored the conference,  discovered a  bit of technology that made me crazy happy, traveled to Cape Cod with most of my neighbors to celebrate a wedding, danced to a bluegrass band, slurped oysters, knit, crocheted, planned new projects and and and....

although this is a photo of Ellen Mason in one of her wonderful knit designs, it sums up how I feel

I'm going to try to post everyday and tell  three things, until we catch up. I think that'll work.  Because  a little structure'd be good,  I've got a case of monkey mind that only George of the Jungle could love. Or, maybe Jane Goodall? Do you think she used that phrase ever, when she was brimming over with ideas, and plans and things on her schedule?

Leah was in one of the Fiber College classes, so was her mom, but on a different day. Great duo!

I'm going to reserve the right to show however many photos I feel like though. May need to show a LOT.
Posted by gale (she shoots sheep shots) at 4:25 PM 8 comments:

a week of strange

I think I fell into an alternative reality for the past 10 days.  Maybe I did! I completed three very full days of photo shoots in Vermont (including this curious sign, I think the spelling and capitalization bother me more than the content), then

came home in time to prepare for this arriving in my neighborhood. Can you see that porch being ripped off the green house on the left? This is the beach on the end of my street. Those waves and the force of the wind are crazy. I live by the Long Island Sound, where big surf is, I dunno, maybe 7 inches? Our power just came back on today, six days later. Turns out I can not successfully knit by candlelight, or crochet. Or do much else productive. And it is not good for my mental health to have empty hands.
Ironically, I had been looking forward to my accommodations at  Fiber College next weekend. In a tent. With my candle lantern , by the sea. Ha. Joke on me! Maybe it'll be different , by choice and without a fridge full of decomposing food.
(Regardless I AM super looking forward to the gathering, and if you are at all tempted, check it out. My classes are not all full, I'd love to have you join in).
Posted by gale (she shoots sheep shots) at 5:34 PM 11 comments: