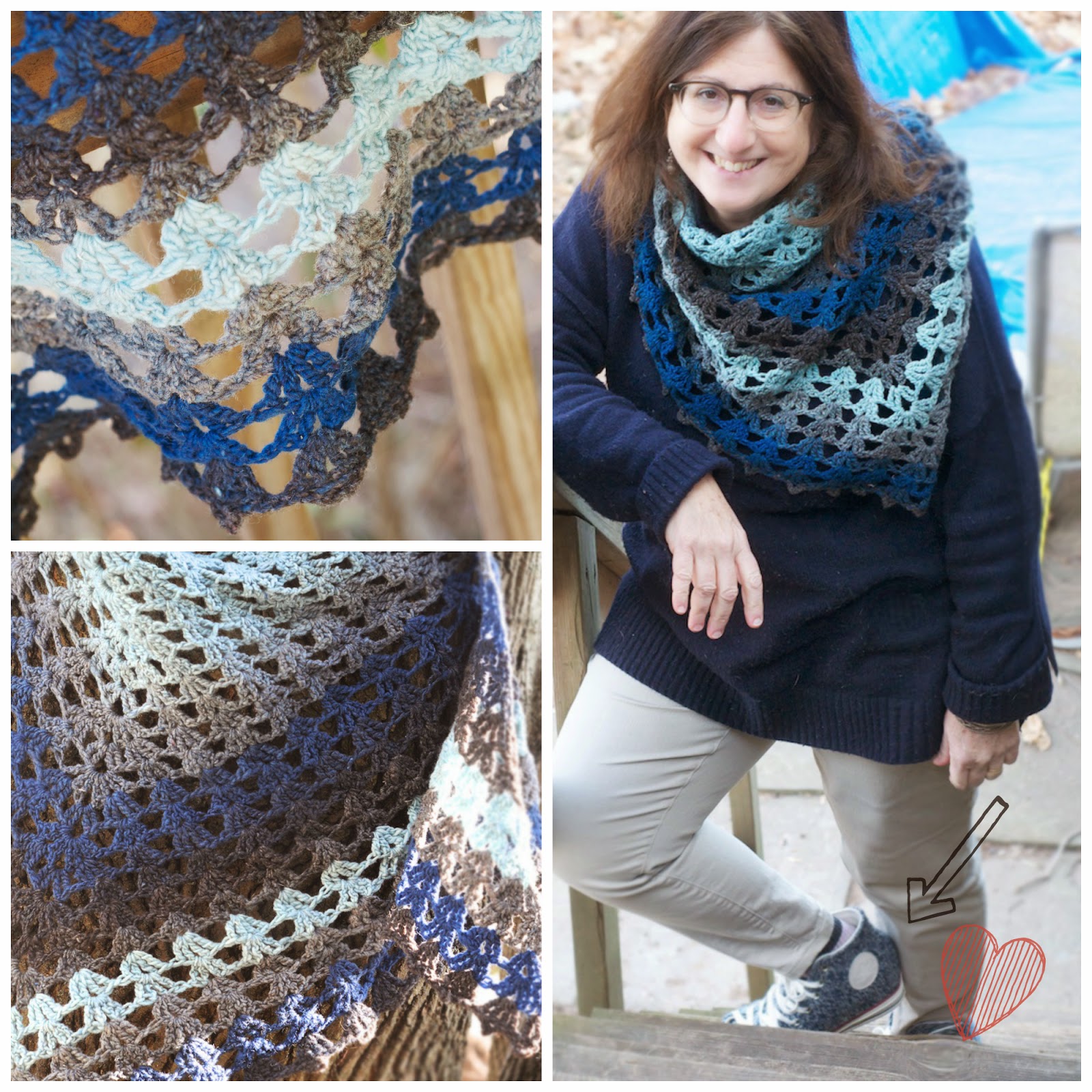 Wingfeathers by Cal Patch, in Rifton yarn from Jill Draper. And my new Chucks!
Shot before the snowstorms started, a week ago.

Were I a more restrained blogger, I'd simply caption this "What Beverly said".

But, I am not. Still, go over and read her story of the shawl.
More and more,  I make things with meaning attached to the materials. A special yarn, a pattern that's suggested or created by a friend, colors that remind me of a very specific geography,  the handwork done in a moment that stays with the piece forever.  This? Has it all.
The Rifton yarn is a joy to work with, I wish you could see the subtle speckles and color blends. It's softened,  drapier now, a week after blocking, than in these photos. The color is exactly the Atlantic in winter,  the views I never get tired of. 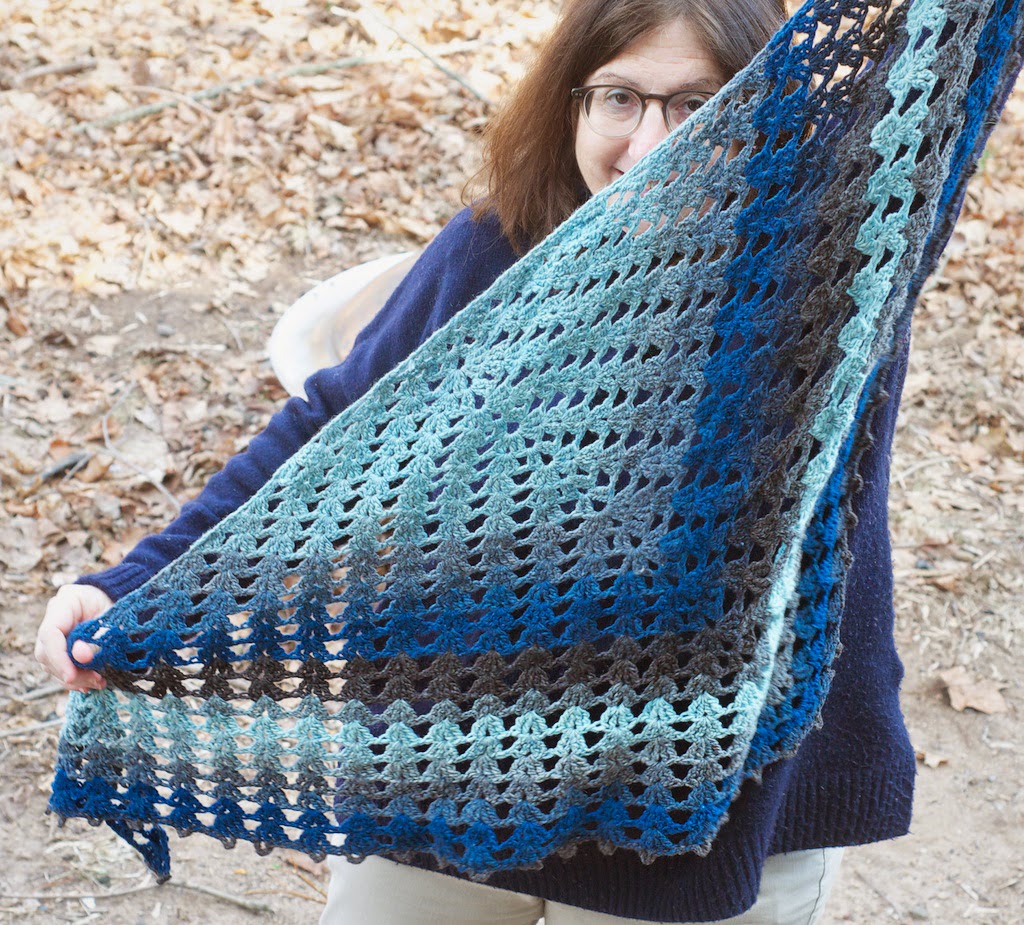 550 yards, almost down to the last yard. I added a picot edge. I am no ace crocheter--I may hook out a Big Ass Granny Square blanket now and then, but I rarely follow a crochet pattern. That may change, I enjoyed this so much. 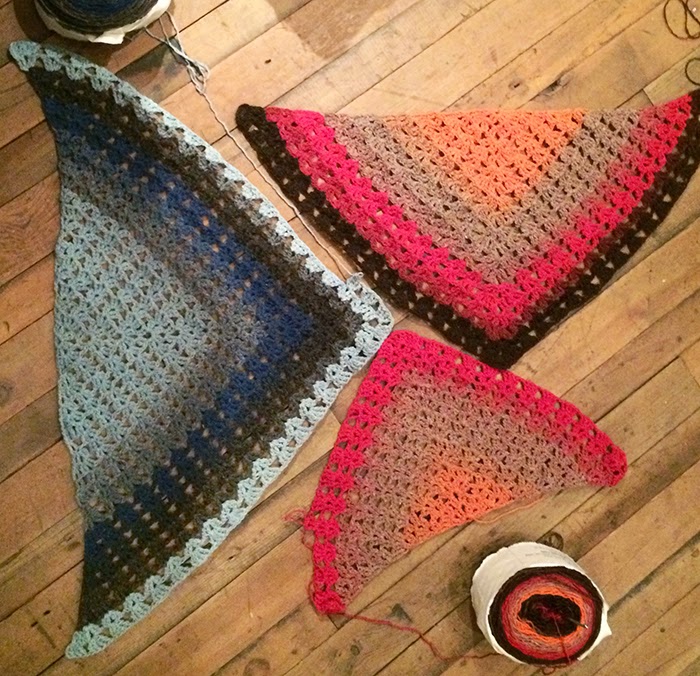 Three Wingfeathers underway, mine on the left, in two Rifton colorways. The yarn comes wrapped in a muslin cloth, a lovely detail. It's a limited run, so if you feel inspired, go get it now.
oh and about those sneakers..they really have knitting on them! An impulse purchase while in NYC. Love. Pretty much them and the Wingfeathers=my winter uniform. Except , of course, for the 2+ feet of new snow on the ground making real boots a necessity.
Posted by gale (she shoots sheep shots) at 6:10 PM 10 comments:

the Starcroft yarn has popped up in NYC!

Here's the full view of the sheep shots from Nash Island that I put in the Starcroft Fiber Mill popup this week at lf8elevate
I made a limited printing for the week but will re-stock and sell by mail, too.  If you are interested, send me a message at  galeATgzucker.com 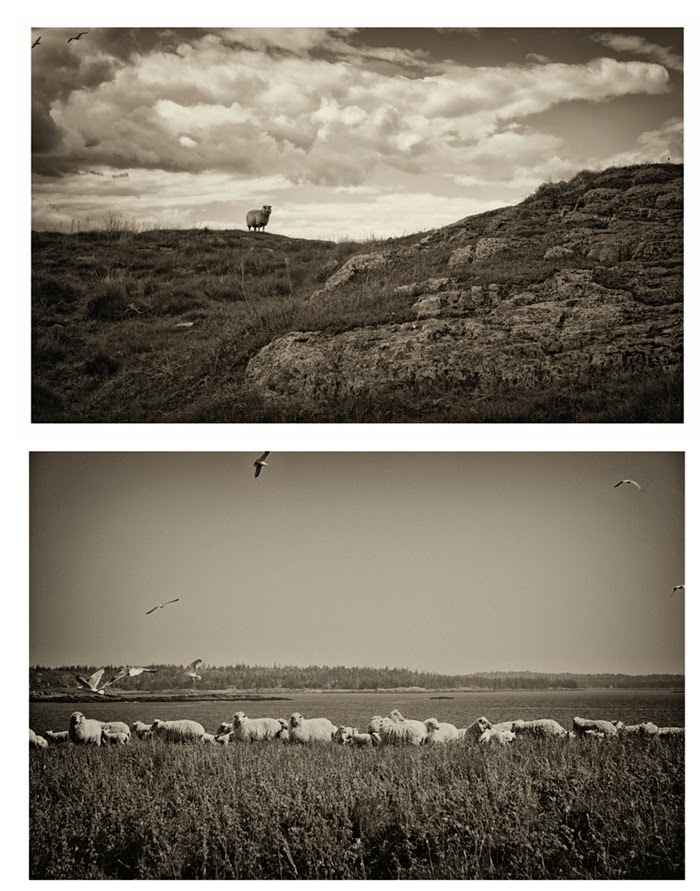 POP UP ADDRESS: 80 east 7th street, NY NY between 1st and 2nd Aves.
HOURS:  12-6   thru Sunday only  till 9 pm Thursday 1/16.
on Thursday 1/16 and Saturday 1/18 there are gatherings with Jani, Kay Gardiner (who masterminded this) and FOJ (Friends of Jani)  knitwear luminaries like Kirsten Kapur and Mary Jane Mucklestone and I hear Laura Nelkin will pop in the pop up too. 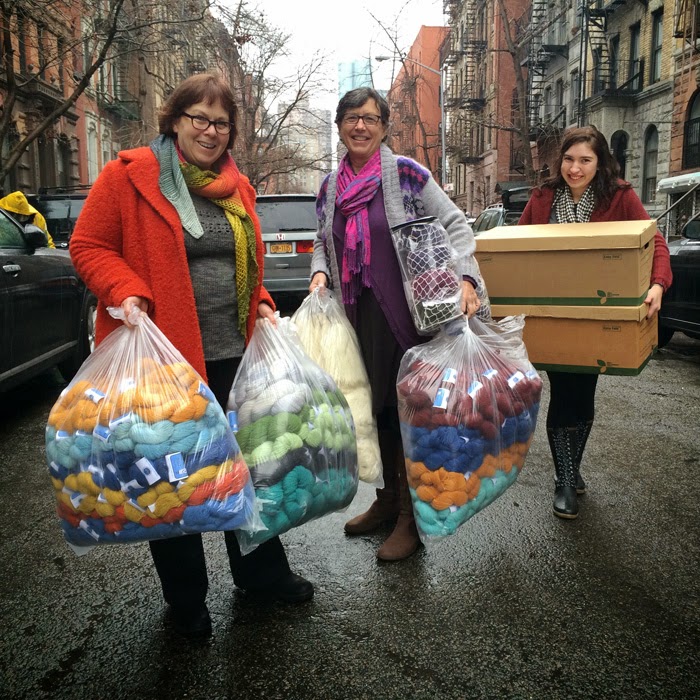 3 hours earlier, standing in a chilly drizzle in the middle of East 7th street, as Kirsten Kapur/Through the Loops, Jani and Yliana unloaded the woolpacked-to-the-gills car.  You know Kirsten has many talents, and it turns out one is making delicious cascading arrangements of yarn.Sooo tempting. 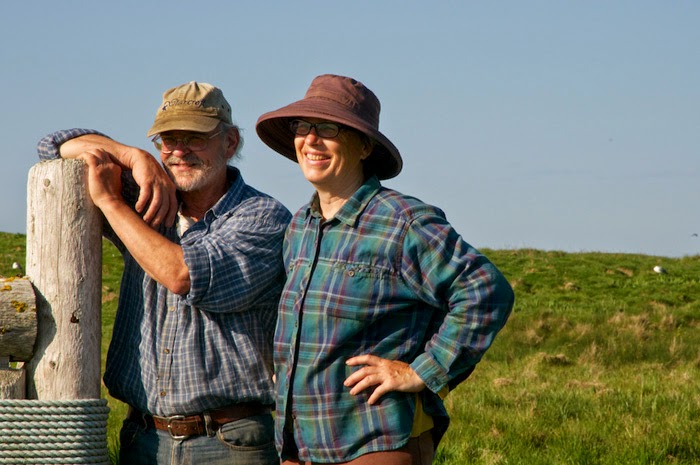 Here's Jani and her husband Grant, on Nash. Keep in mind they live in the woods, in a town of 400 or so, Down East (that's way north in regular geography) so this whole shop in NYC for a week is just...radical, I guess, is the best word to use.  I feel like you need to see a little more of Jani's "real life" to understand where the gorgeous handyed yarn she's brought down comes from.  I'm super lucky to have crossed paths and become friends over the last few years.  Helping out at the roundup and shearing on the island is a standout joyous top ten day of any year. 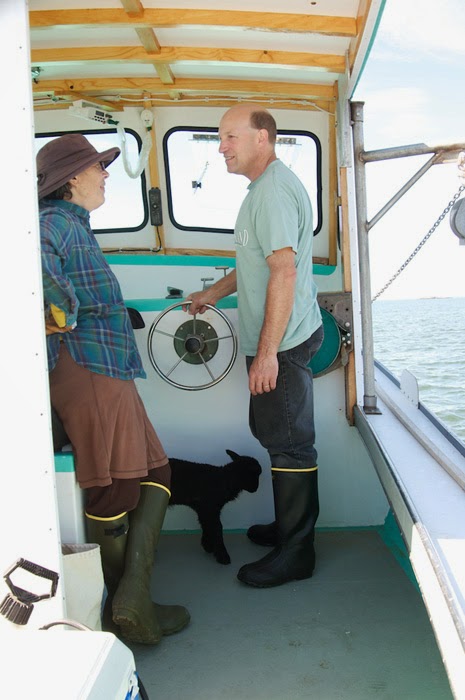 Jani commuting to work with the flock, by lobster boat, with Alfie Wakeman, the island owner. Cleat, the orphan sheep last year, rides along. 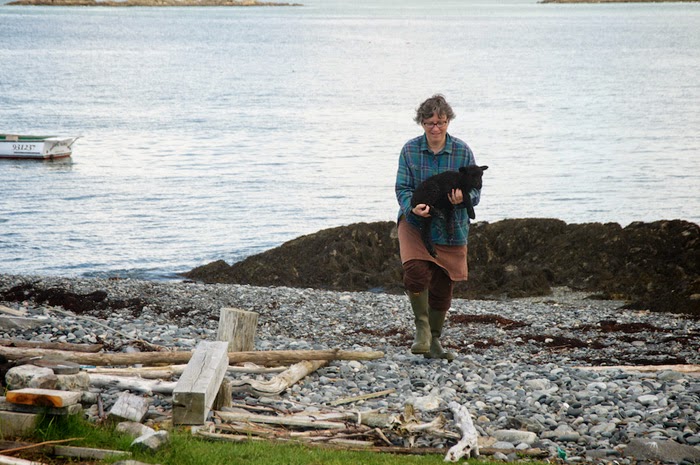 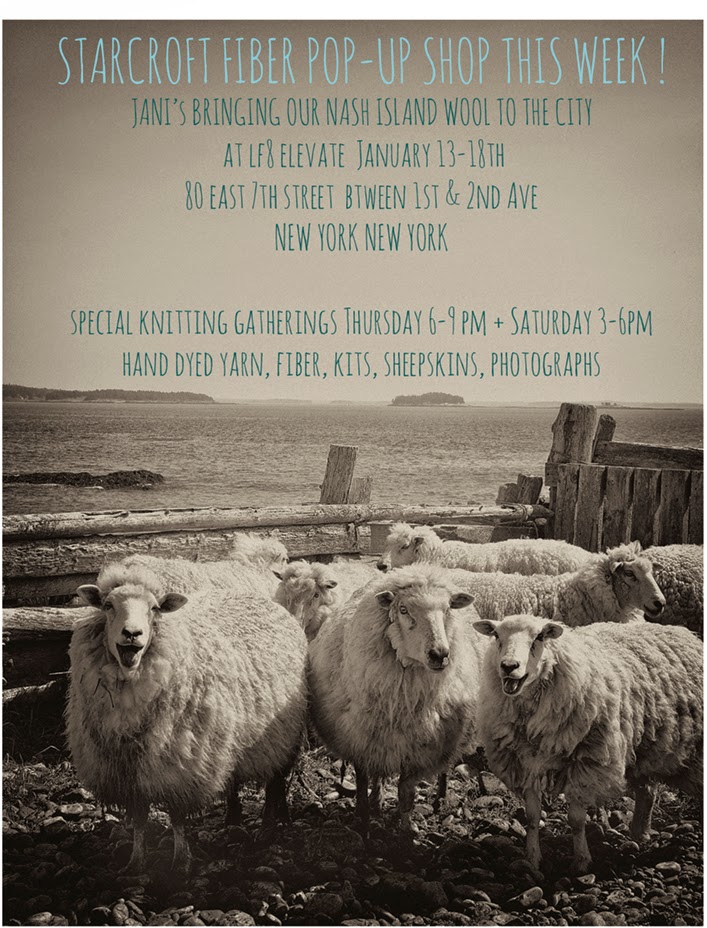 Borrowing the artful history writing of Kay Gardiner, as it appeared on Instagram recently
"True story. Once upon a time in the 1970s (approximately), two little girls named Kay and @galezucker were NOT allowed to start flocks of sheep. So they became Camp Fire Girls. Which was great, but not the same as having a flock of sheep on a lighthouse island off the coast of Maine. To repair this psychic injury, when they grew up Kay and Gale persuaded @janistarcroft to bring her Nash Island wool yarns to a jewel box of a shop on East 7th Street in NYC, @lf8elevate One week only starting January 13.
Join us on January 15 from 6-9 and January 17 (Saturday) from 3-6 for knittin' and chattin' old skool."

I can't add much except to say
• the Starcroft yarn is very special, and never available in NY before.
• there'll be a flock of knitters you'd enjoy the company of at the shop, during the knit and chats on Thursday and Saturday
• Jani graciously invited me to share some of my printed photographs and limited edition postcards from visits with her Nash Island sheep--all sepia toned, including the one above--so that'll be in the shop, too
• This whole crazy adventure is Kay's brainstorm, and I never say no to riding shotgun when Kay's behind the wheel. Join us!

with icing on top 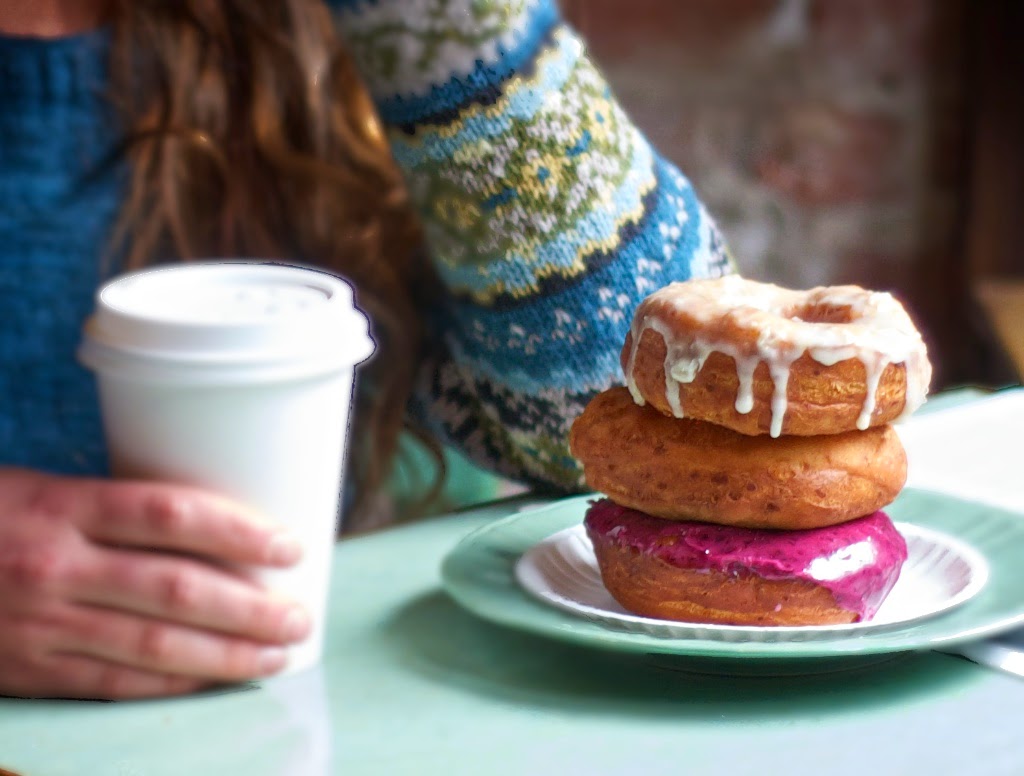 I hope you had the sweetest of holiday seasons. It's been an unusually- even for me, who doesn't sit still easily-  bustling month.  My blogging habit evap-o-rated!

Above, a sneak peek* from yesterday's photo shoot in Portland, Maine for Swans Island yarns. Such lovely clients, such to-die-for designs, and oh yes, the donuts are awesome, too. So good we are swinging by the shop to get some before we leave town today.  If I am allowed one teeny tiny kvetch, the temperature is -8F degrees...and it wasn't too much warmer while we were shooting outside yesterday. Although it was above zero.  The warmth of squeezing in visits with friends Mary Jane Mucklestone and Samantha at A Gathering of Stitches made this work trip all the sweeter.

See you in NY next week, between January 13-18? ? I'll be at VK Live for funs  and am so excited to be helping Jani from Starcroft Fiber at her pop=up Nash Island yarn  in the City shop at lf8elevate at 80 east 7th street in NYC. If you'll be in town, come down! Jani's yarn and island wool, some knit and chats with designers you know and love, it is a charming, artful shop..  I'll have a limited edition set of Nash Island photographs mounted and cards just for the occasion. The special events  are on Thursday evening 6-9 (with Mary Jane Mucklestone there)  and Saturuday afternoon. 4-6 with Kay Gardiner knitting along .details tomorrow!
Stay warm, wherever you are!

* ok if you know me, you know how I can go on and on about how there's one main story per photo, and how wrong a photo shoot can go when you can't keep it straight. That, my friends, is definitely a photo about donuts.