a coupla weeks in which nothing went as planned

Just when you think planets are aligned, the ducks are in a row, the pegs are fitting their holes, the gears are meshing, it all just gets skewed. That's it. The cosmos just says a big Skew You! As the old Italian ladies say at the supermarket, whadya gonna do?
Its not always bad. Its just different.

A few unplans from the past week or so: 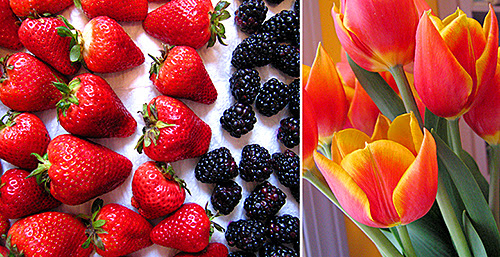 Spring sprung! With it the Passover seder which was at my house. We thought, why not make it small and simple? Suuuure. Three kinds of kugel, six desserts, two entrees and all those odd side dishes that you never ever make except for this holiday later, a Seder meal it was. For the record, Charosets? I maintain should be eaten all year round. Gefilte fish? Once a year is just right. And hold the fish broth jelly. puh-lease.

Unplans in the knitting department:
With much work distraction, I hardly fit in any knitting, except late at night, very tired. I split the front & back for the Saddle Seam Pullover. A couple of entries ago I worried it might play a trick on me. No need, I played a trick on myself. An inch or so into working the front, something seemed...off. I'd started the sweater in size med-large but counted off the split back in size Large, resulting in a front that was 20 stitches less than the back. When you find out this sort of thing after midnight you have one choice only. Put it down and walk away.

Feeling quite uncalm , I looked to what I could knit mindlessly. A simple spring scarf. A simple stitch pattern, the same row over & over. 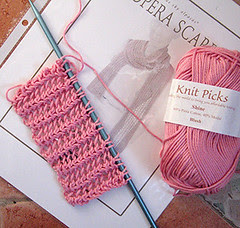 On size 8 needles, not looking so airy. 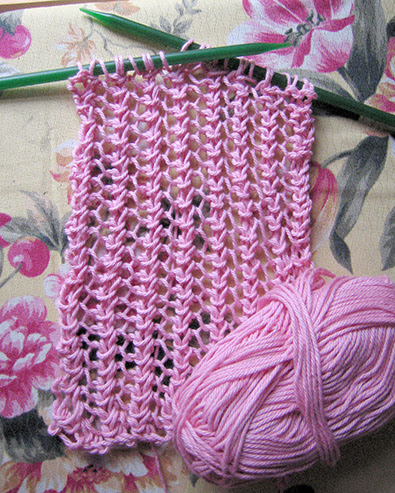 On size 10 1/2 needles. Better. I think the pattern image shows a much wider version than the actual pattern decribes as 23 stitches across, and it'd have more drape in the Alpaca Silk it calls for. I was going to tear it out and make something else but after I shot it for the record here, I realized it'll be fine. Soothing, too.

On the slate for the next few days: keeping an eye on several 6th grade couples coming over at a son's request. Yes, that's right. Sixth grade couples. He's one of those kids. Annie Modesitt speaking in town tomorrow and I plan to be there, as soon as all the puppy eyes go home.
Then I'm heading down to the beach in Delaware for a few days of spring break with the Guys. I will knit mindlessly in the car down on my cottony scarf. I will tear back the Saddle Seam Pullover and get it back on track, stopping to admire it every eight stitches or so, noting any size changes. Oh, and I've got my reading all lined up, too. 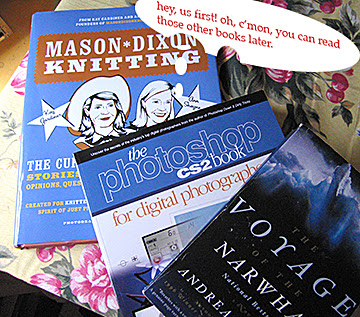 Is there anything better than a book that speaks to you????
Posted by gale (she shoots sheep shots) at 7:41 PM

Gaw-geous fruit and oh, you tulips! And the scarf is crooning, "It migh-ight as we-ell-be Spring!" to me.

Charosets! I had two sweet girls as dorm-mates in college, and when I didn't leave school one Spring Break, they shared some Seder supper. Yum. I've never forgotten that meal!

Glad to see you back in blogaction. Missed ya.

Yummm....Passover is never easy but it sure is yummy. The scarf is a perfect, easy, relaxing knit. I had to go up on the needles, too.

A few days at the beach is just what you need. The planets should be aligned when you get back.

LOL! Gale! I think that Photoshop book might be more fun . . .

I was so sorry that the stars didn't align properly for us to meet in New York. We'll track you down soon, I know we will.

That lacy scarf is beautiful. I hope you knit ten feet of it at the beach.

I love the photos! Also, I think the scarf is great! I have a friend who is obsessed with pink - I may have to make something similar for her!