No secret: I'm a big fan & cheerleader for the Red Scarf project, run by Foster Care for Success (formerly known as Orphan Foundation of America).
Before I go any further, go enter Norma's contest to support the Red Scarf Scholarship fund and win a copy of Craft Activism. In which there's a chapter on same. 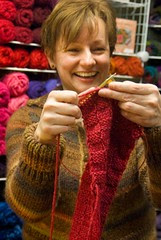 At this point my connections to the Red Scarf Project are so  intermingled I can't untangle them. Seriously I just tried.  What began as a personal connection (knitter, adoptive parent, photojournalist covering the foster care system) connected  to work, new friends, inspiration......holy crap there's so much, if I had the teeniest bit of fiction writing talent I could turn it into a fabulous chicklit book. But, it would not be fiction. If you know what I am saying.
How about some behind the scenes look at the Red Scarf project in the new book? 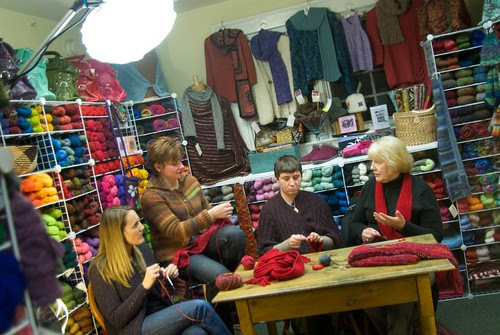 You can't write about Craft Activism without crafting for a cause. Red Scarf is a perfect example. You can read the chapter excerpted  to learn why. Anyhoo, when I called Norma to say we wanted to feature her,  she was cleaning the guest room before we got off the phone.
I'd had a chat about my photographic approach with a design director at my publisher, and promised her I'd play around with a lighting source & setup she said Martha Stewart favors (Martha & I share this publisher). It's very flattering & gentle lighting, it shows textiles and women-of-a-certain-age in a beautiful glow. 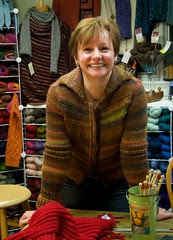 Ahem, NOT that Norma is anywhere near Martha's certain age.
However , it almost killed me, with tons of shlepping & setup and does not lend itself at all well to my kinetic style.Those who took my advanced lighting class at Fiber College got to give it a whirl, though. I'd use it again only for a very staged shot, or still life work. 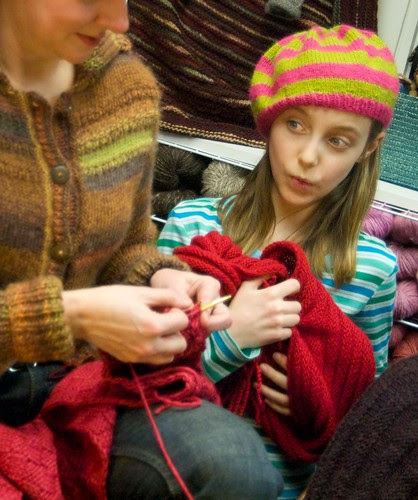 A lot of crafting in support of causes involves knitting community, so we were at Norma's LYS, the quite wonderful Kaleidoscope Yarn in Essex Junction VT.  Jill, the owner, is a big supporter of Red Scarf, and so are her daughters. 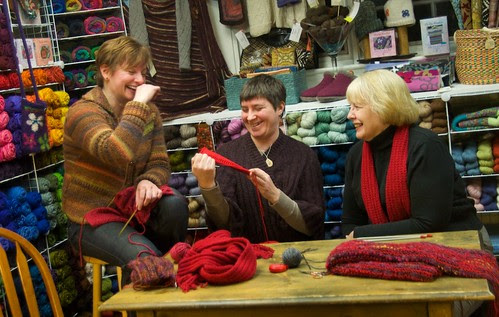 This is Norma, shop worker Shawn, and Joan red scarfing it up.
If you're wondering about the sweaters shown on the subjects, it's not a staged thing. It was February, and let me put it this way. If you a take a right hand turn out of Norma's driveway, you  cross into Canada in about 15 minutes. Very north. Very wool country.  Knitters paradise. Go visit! Or at least go knit a Red Scarf, deadline December 15.
Posted by gale (she shoots sheep shots) at 1:03 PM

Thanks so much, Gale. I had so much fun that day with you at Kaleidescope!!! Everyone I know is getting a copy for Christmas :>)

What a lovely post! Look at the fun we were having! :)

Red Scarf was my intro to you, too. I may not get one done this year, but I'll send a bunch of Starbucks/Target gift cards at least.

The Kindle ipad version is very cool - the patterns link to PDF's that can be downloaded and printed. Thinking Fussy Cuts from leftover sock yarn. Just thinking right now :)

Heh, I was looking at the photos thinking "That looks like Kaleidoscope Yarns" (my fave shop) and sure enough...it is!!!

Also, the gal in the middle is Shawn, not Shannon - she's awesome!!!

ooh thanks for the correction on Shawn's name, I knew it sounded wrong. I never forget a face but names? oh yeah.

Favorite photo - that one of Jill's daughter in the striped cap. She is so alive in that shot!

I'm guessing my support will be financial again this year - more money than time in my budget. I suspect others are in the opposite situation, so that should balance out.