3 things about the brioche topper (to start the year) 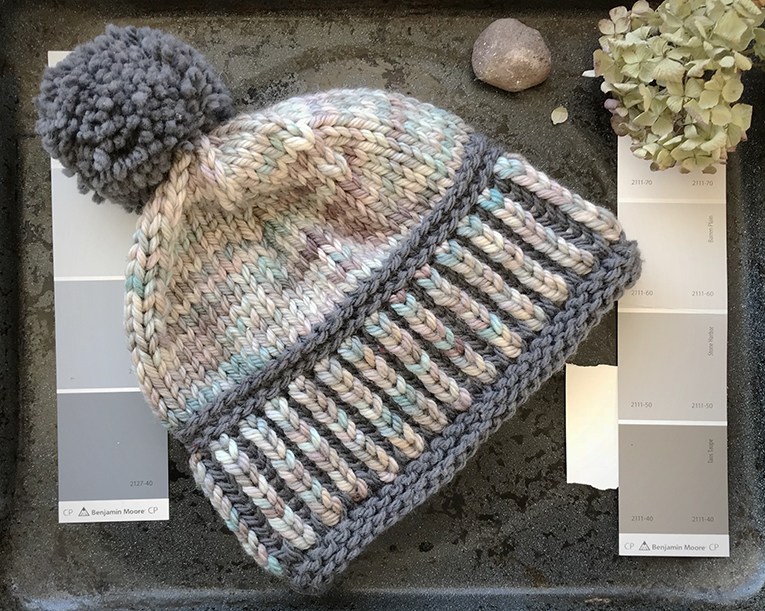 Brioche Topper by Laura Nelkin is my first FO for 2018.  It was also my last FO for 2017.  Lucky for me  (Thing 1):  The Brioche Topper is a fun knit.
It's a perfect Three on Thursday post because...I knit it three times.  Above: the final, version 3 .
It was a gift for sister Lulu, she wanted something chunky, and I thought I'd supersize the aran weight pattern into something slouchier. 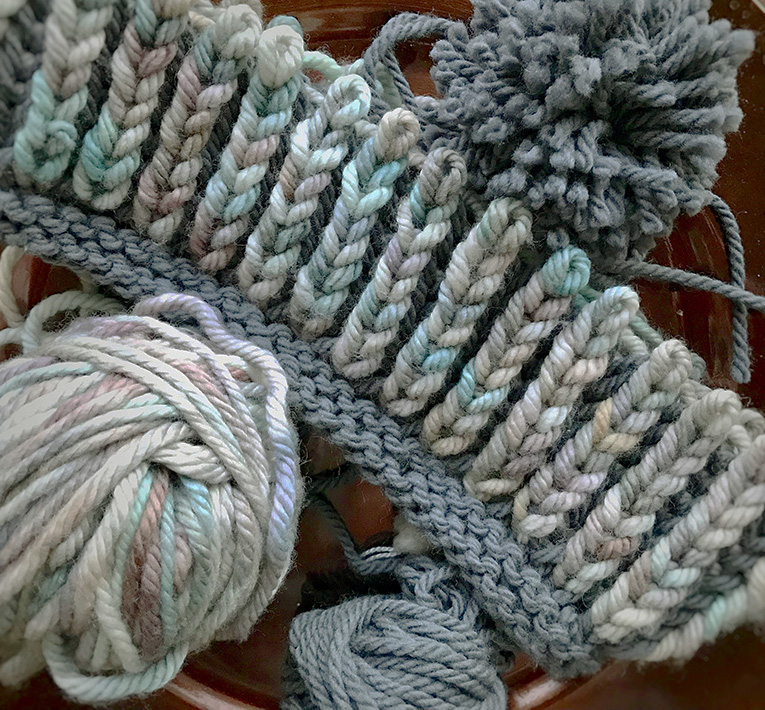 Above, a view of unravelling between V1 & 2.
V1 was ginormous. Version 2 was smaller, but not quite small enough (I like loose hats, turns out sister Lulu does not, and to be fair, she's  petite) . V3,  knit Tuesday night, just right.
Are you wondering which yarn I'm using for all this knitting, ripping out and knitting again. ? The hand dyed is a Wonderland Yarns Tweedle Dee Dum bulky weight merino  in the colorway January (nailed it! so. exactly. right). and the grey is Quince  Osprey. Both feel soft and squooshy and warm. Both held up fabulously to the re-do and the re-do of the re-do. 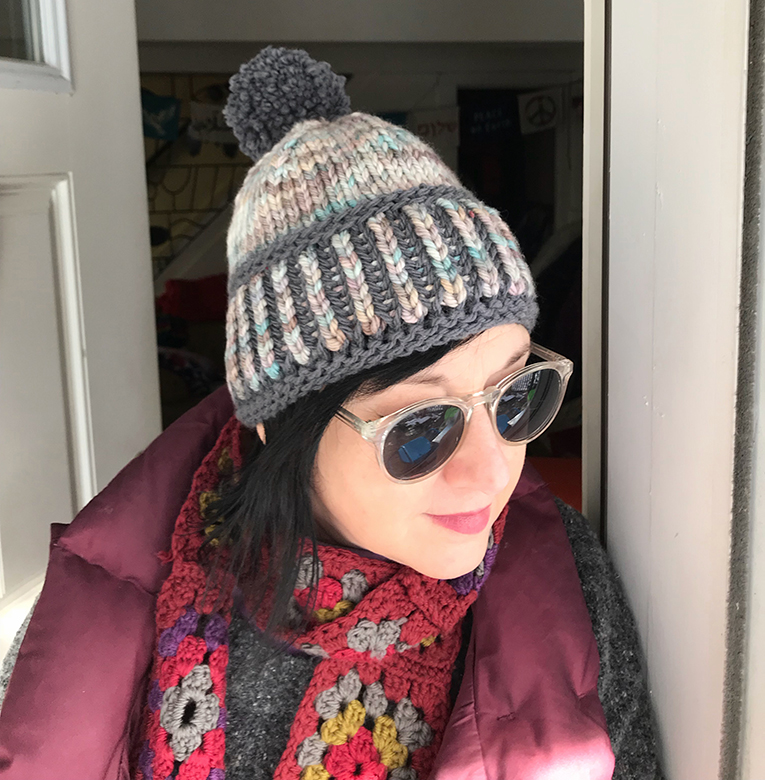 It looks cute on her, right? --and  she showed up wearing  gift circa 2010 granny square scarf .

I'll be knitting more of these.  Because it's a great design. Thing 2: The brioche section, which is essentially double weight, is great on the ears. Also if you like brioche but don't loovvvvve it, it is just a small section of the project. However, I DO I loovvvvve brioche, so I'm ready to cast on another brioche project.


My final version used size 7US needles for the brioche section and size 10US for the rest of it.  This 3 sizes difference is what the designer suggested. When I knit V1, I thought really full brioche would be better, so I used size 9 needles.  Nope! Duh! Listen to the designer! It was waaaay too relaxed. 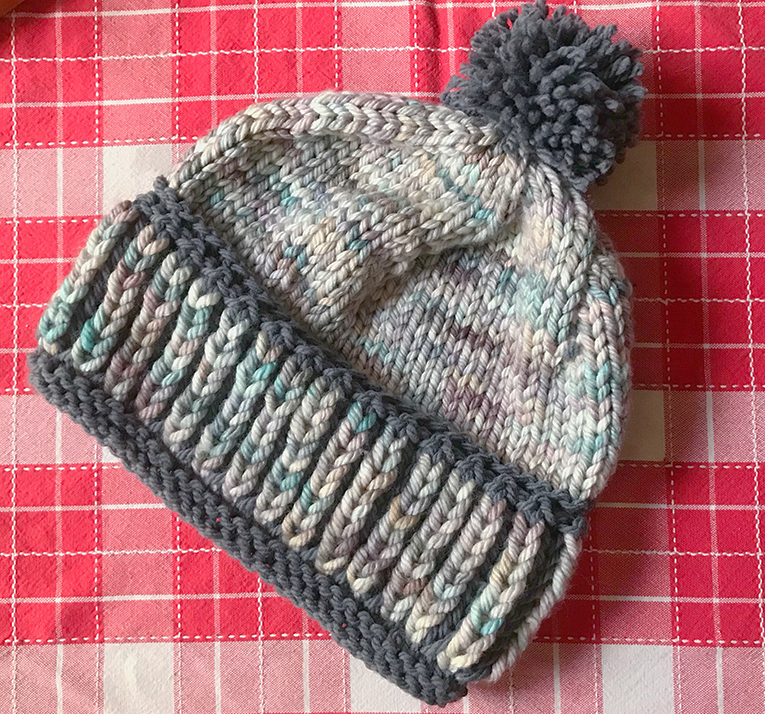 And, in the interest of sharing BTS, here's the uncropped view of my top photo.  Usually I duck outside to make a quick photo on the porch but it's so freakin' cold out I just didn't want to. 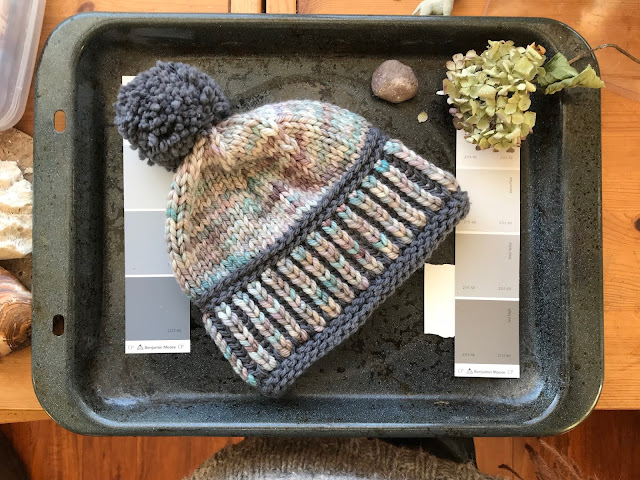 So... here you see an old roasting pan, some paint chips I picked up to choose colors for painting the stairs and stairway walls (I guess their colorway is also January?)  .  I plopped it on a cabinet that gets decent light from windows nearby.  I'm getting very enamored of shooting on old baking trays. You'll see more of that this year, too, no doubt.

Stay warm fellow east coasters in the US! Knit a new hat today!

Posted by gale (she shoots sheep shots) at 9:44 AM

I have many things to say about this post:
1. THANKYOU!
2. Your hat is fabulous!
3. I love seeing people learn with my patterns!
4. AWESOME yarn choices... I love the combo!!!!
5. I've been trying to tell my family I am right for years and just listen to me, seems like you might have figured that out before they did...
6. I am totally using an old baking tray for my next shoot!

I love the hat and the way you incorporated this into a 3 for Thursday post, too!

That is a lovely hat! I've been wanting to learn brioche... this looks like the perfect amount of it to try it out and see if I like it!

This is all true. I love my hat, the yarn is beautiful, my head is pointy, my sister knits wonderful gifts which I hoard and wear for many years. - Sister Lulu

I love the baking tray photos, and LOVE the hat even more!

That is a gorgeous hat! Love the colours! And pompoms are in again - how cool is that?!

And are you painting? I need a new warm hat, I may just do this. I have some yarn I could use....

Gale, it is beautiful. I may have to cast on for this one.

You had me chuckling and drooling over your v1, 2, 3 of this hat! Happy New Year!

That's such a pretty hat - the fact it's also warm is just an added bonus. :-)

That hat! Too cute! And, thanks for the photo ideas!

What a fun hat - brioche is on my "to learn" skills list - this looks like it could be a contender for that spot. Glad that 3rd time was the charm for the knit. :)

Beautiful hat! I have also fallen down the brioche rabbit hole, and am happily brioching my way through a hat. I've re-finished the top several times: Too short? Too tall? Too short? But don't mind doing it because the brioche is so. much. fun.

And a big yes to the smaller needles. And! I'm going to have to try your baking tray trick! Or some other flat kitchen item. Hmmmm.