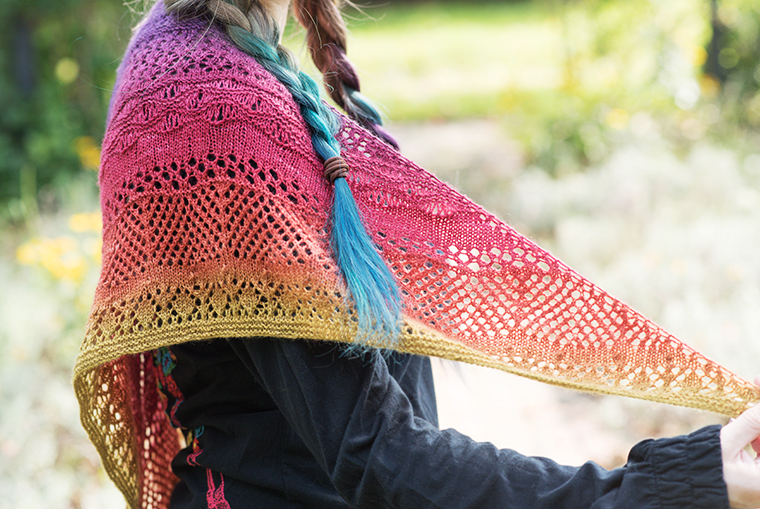 Behind the Scenes with Apple Tree Knits Fall Winter Collection - released just last week.  Here's the link to the patterns on Ravelry.  That's the Awestruck Shawl **by the genius behind Apple Tree Knits, Liz Capik, herself, knit in one of her gradient skeins. 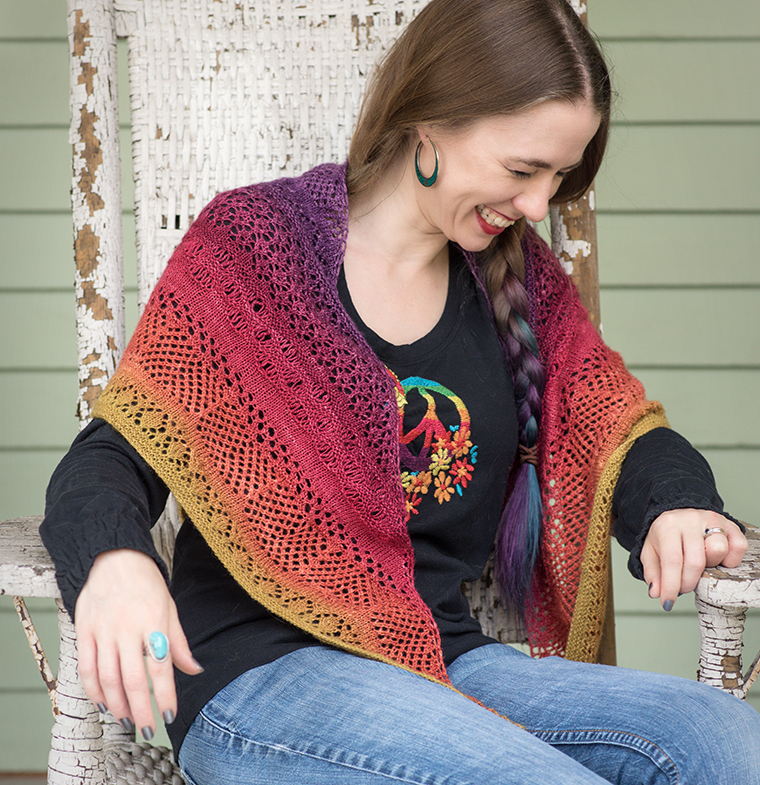 We try to look serious in the photos but between shots, we crack ourselves up. Liz models her own yarn!  Usually when designers or dyers say they'd like to pose in their own samples I hesitate. It's a lot of pressure to be the client, the artist and the model, including looking fabulous. But she nailed it, right? 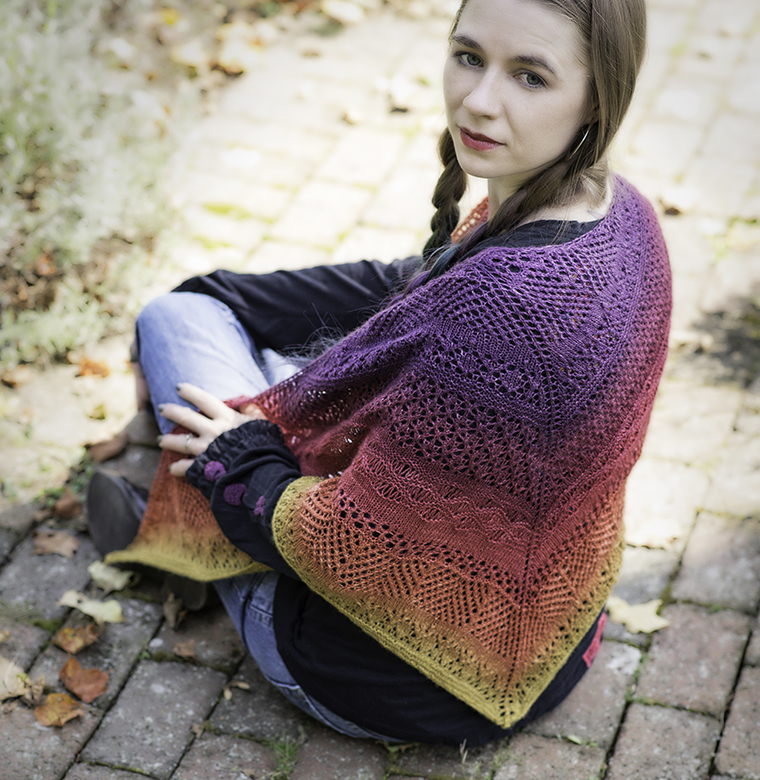 When Liz contacted me to start planning a shoot, she sent  a moodboard and said "autumn-ish" and Boho. And she is based in New Jersey.  Bingo. I knew we had to shoot at stylist/ creative director /writer Karin Strom's place near the Delaware Water Gap, and have Karin style it.  Done and done! 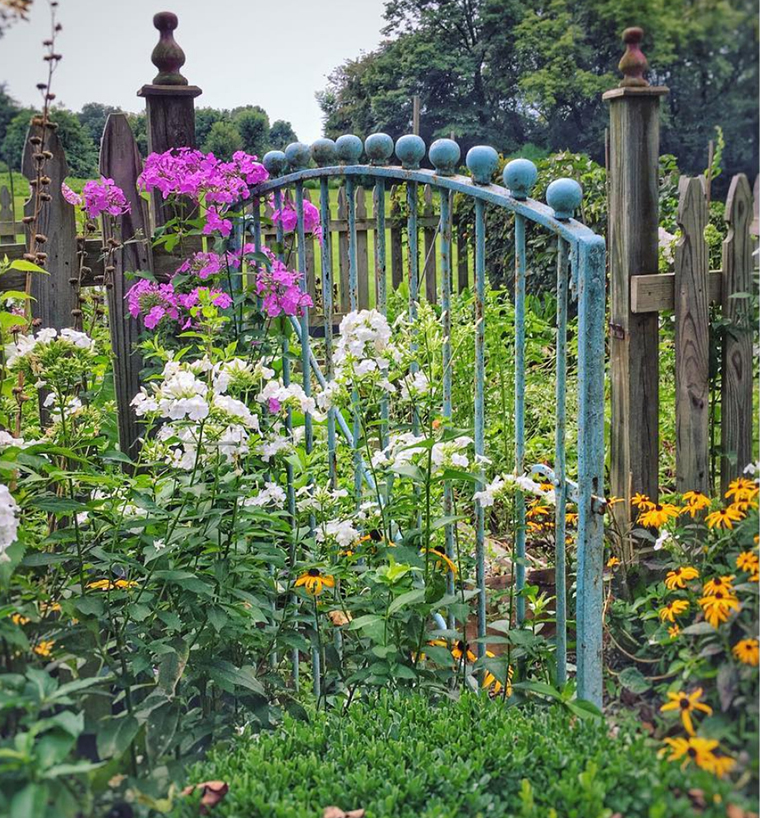 Except we shot on a hot August day, with the gardens still juicy...so we had to be careful framing to make sure you wouldn't know the season. In the shot above on the brick walk, we scavenged the yard for early fallen leaves to scatter for a cooler weather vibe.  I am not sure how Liz managed to look serene and cool through all ten pieces. Some people have all the skills. 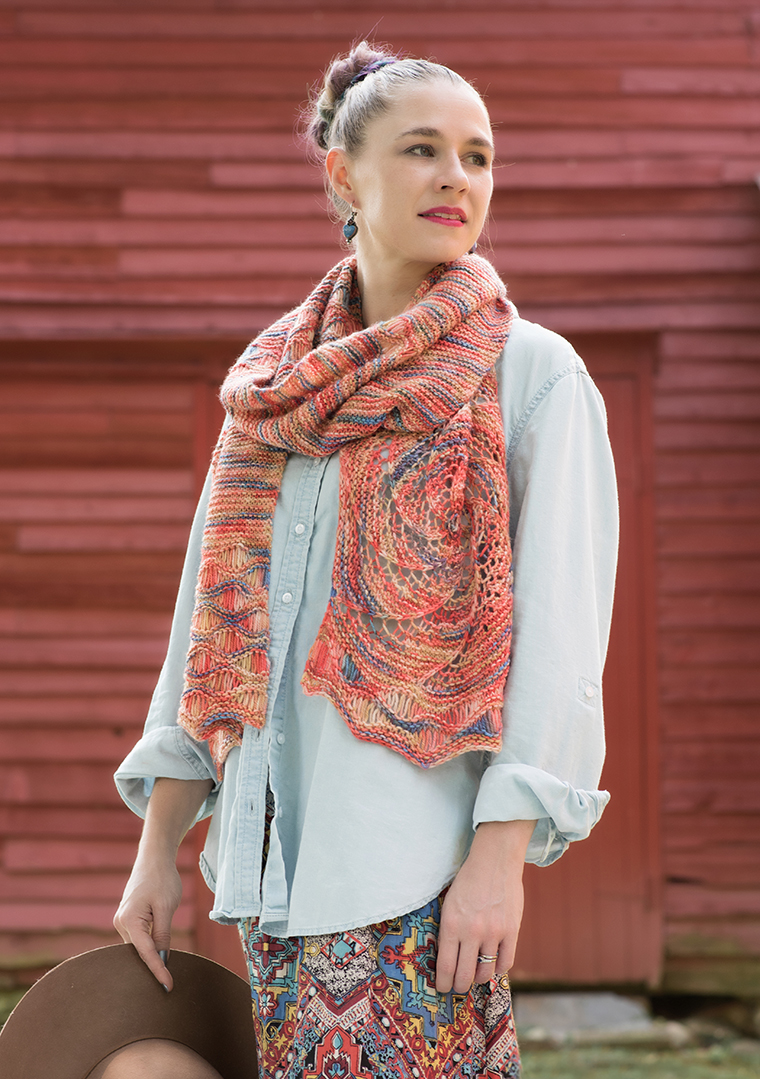 See?  This scarf, Fluidity Life, is a fave from the shoot. Not just because of the styling :-). You know how it is very very hard to find a pattern that is interesting to knit and works with--not against- a variegated handpainted yarn. This one is a fun project--click on that link by the name- it says it's started in the round, then continues knit flat. An adventure.  Liz' yarns, if you've never seen them in your LYS, are sometimes  subtle and water color-y gentle in their hues. But she's got some punch, too. 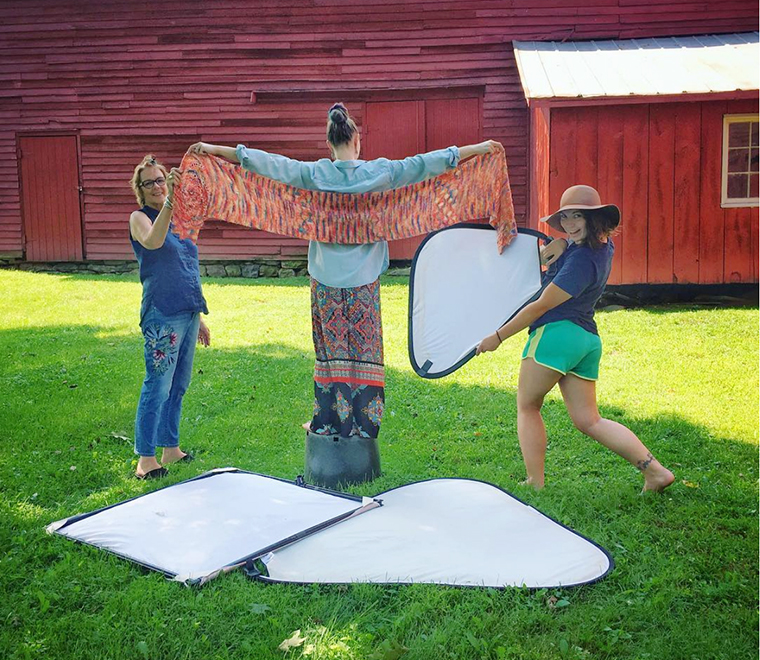 See how UN-autumn-like it was? That's Karin Strom on the left, and my cheezin' assistant Yliana on the right. She's wearing a hat we were handing in and out of the photo for a prop, you can see it in the photo above this one.  Liz is balancing on a bucket so I can shoot her at an angle to crop out the cheery green grass.  The big white reflectors are down to try to block off green from taking over and tinting the photo***. 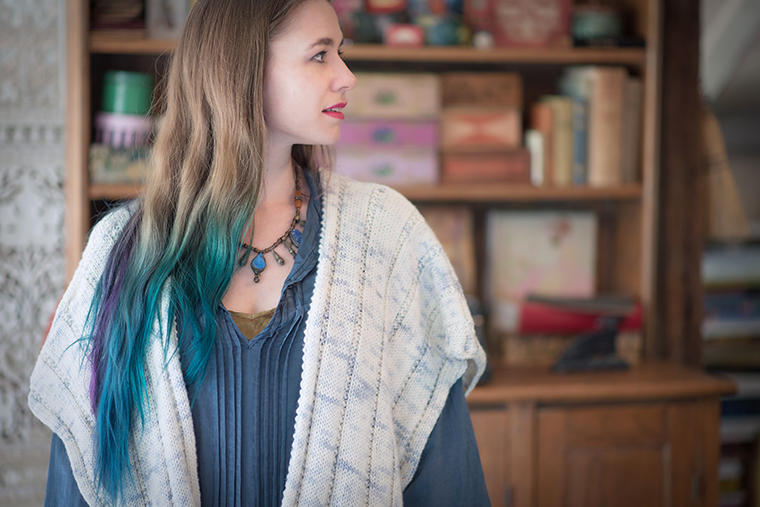 I can't only show bright colors when I loooovvvve the more subtle yarns Liz dyes. This ruana is a perfect example. All of the intensely speckled yarns that have become popular this season are fun but hard to wear in garment form if you're not a bright speckled person. If you know what I mean. 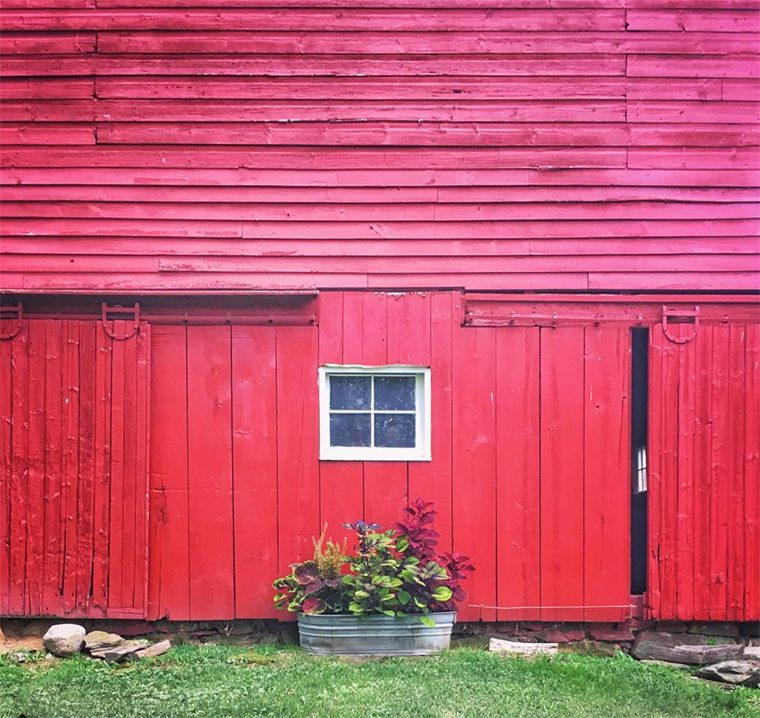 Had to include this. The only downside of shooting at Karin's Victorian farmhuse property is I want to just wander around and make pretty pictures of all the little vignettes she creates there. That's a whole 'nother story.

** That Awestruck Shawl is especially fab because she designed it to be knit with gradients and use every inch of the special yarn. You can keep going until you run out of gradient, and not waste any of a beautiful  skein, at whatever yardage you have. Love!

*** Getting on my photographer soapbox here: I often hear new photographers say "oh, you can just fix that in photo editing, it doesn't matter " -in regard to shooting with poor shadow detail, or in situations with a mixed light source that give a color cast. While it is true that you can correct, you will have much better images- and be a much better photographer--if you learn how to control light and color. You can make a flawed picture better in photo editing but you ain't never gonna make it great. Don't you want to make great photographs?
Ahem. Steppin' down!
Posted by gale (she shoots sheep shots) at 10:20 AM

Those are LOVELY photos! I've started trying to learn to use my DSLR better, but I'm nowhere near your level. I need to find a day where I can take the time to go somewhere pretty with my camera and manual and just try stuff.

Thanks for the links to the patterns, too! Lovely stuff.

SO MUCH gorgeous-ness! I really love it when you take us behind-the-scenes of your photo shoots and explain how it all comes together. LOVE. Those are great designs -- and styled perfectly. The colors! YUM. XO

Re: The soapbox... if they say-er had to be he do-er, they'd change their mind right quick! That sort of work gets old REAL fast. ;)

Oh, man. Fantastic photos, Gale! And, please don't ever stop the soapbox! You are so right, and thank you for sharing such great advice! And, those knits! Beautiful!

Lovely assistants! And thanks for more photo tips, as always.

BTS Cap make your outfit way more visually appealing, as well as they defend you from the sun. These caps also meet the requirements of fall weather quite well. They keep you comfortable throughout the season and give your wardrobe that needed boost.