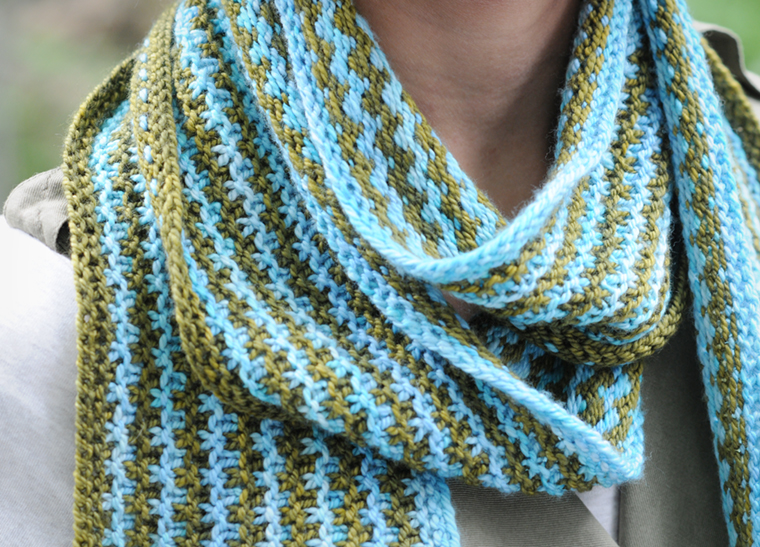 There's a train station in New York City,
That's elegant, old and so pretty.
Waiting or onboard,
Simple knitting's adored.
Empty handed? You have my pity!** 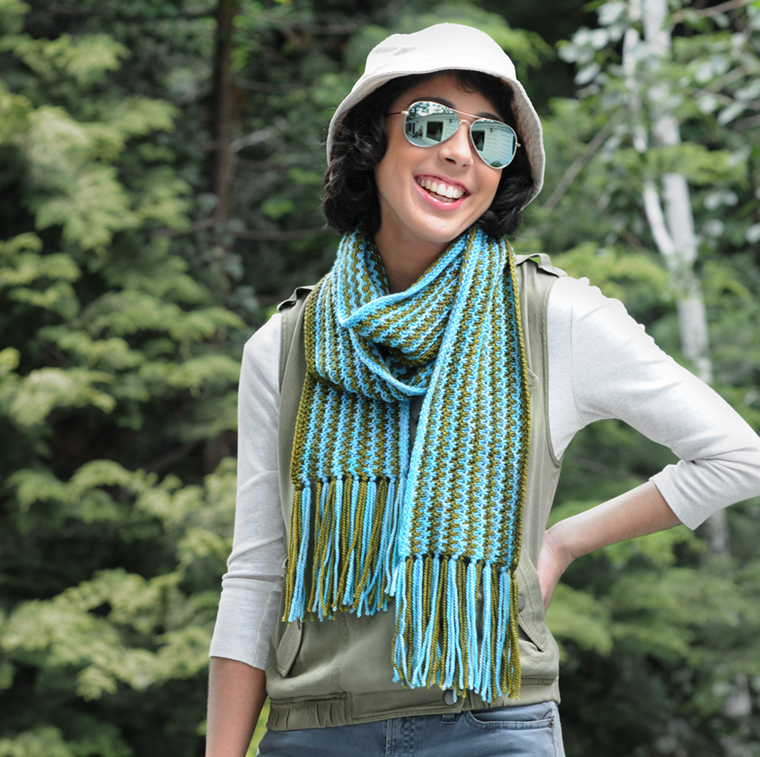 At a glance, its a  striped textured scarf with fringe. Take a closer look! I am crazy about this clever pattern. Here's why:

Instead of the expected knit back and forth on looooonnnnngggg rows, it is actually knit in the round. Yup, that's right, in the round. Mind blown? 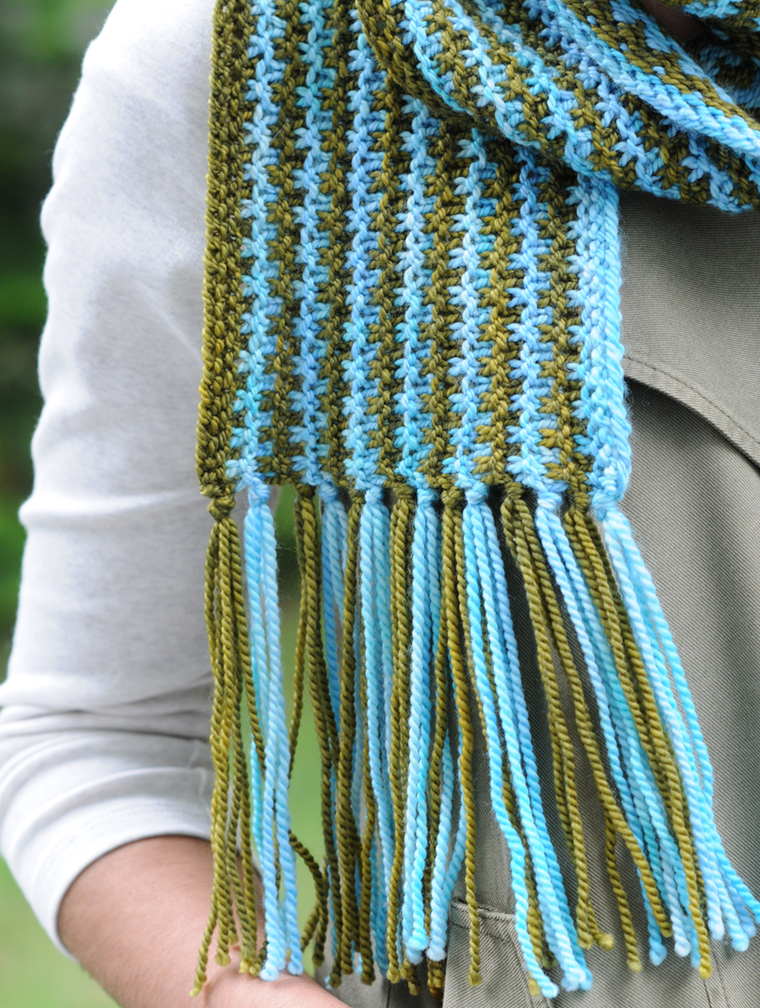 You cast on a lot of stitches and knit around till you have the desired width of your scarf, (or run out of yarn).  Cleverly designed to have no finishing , it has a section where you let stitches drop and cut once, to create the fringe.

OK. As one persnickety and mean-spirited review pointed out, there is the very minimal finishing of needing to knot the fringes at their base.  And optionally, block it.  Shhh don't tell anyone, you could skip the blocking if it is draping nicely.
The texture is a simple slip stitch with a good rhythm-- you'll not need any glancing at a pattern. Which is why it is great travel/waiting knitting. If you've ever knit a Honey Cowl (and holy cow there are close to 24,000 of them on Ravelry, though I think half of those were knit by Mason Dixon Kay), I refer you to that kind of vibe.  Though not the same texture. It is, however, really pretty on both sides. 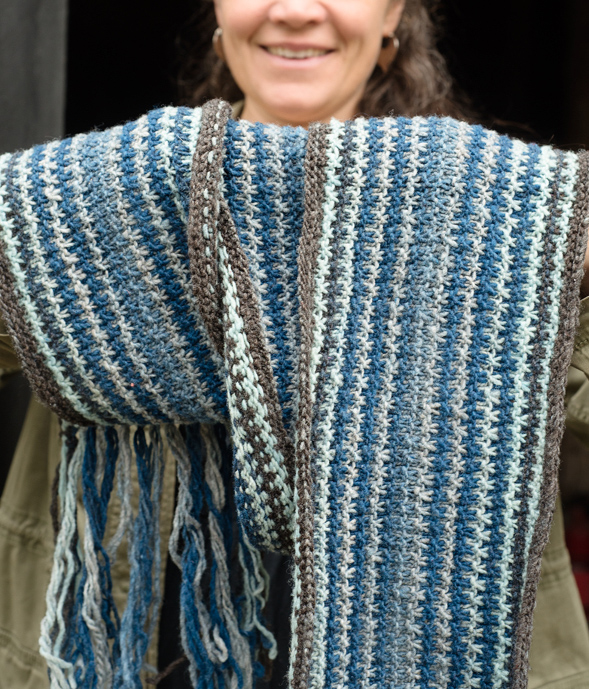 Kirsten designed it using two shades of DK weight yarns but Mary Lou cleverly used a skein of Jill Draper Makes Stuff Rifton, which has long color changes-- making the project even Drop Dead Easier, by not needing to switch skeins. ***   If you fell for beautiful gradients at a festival or yarn shop recently, this might be a good use for them. 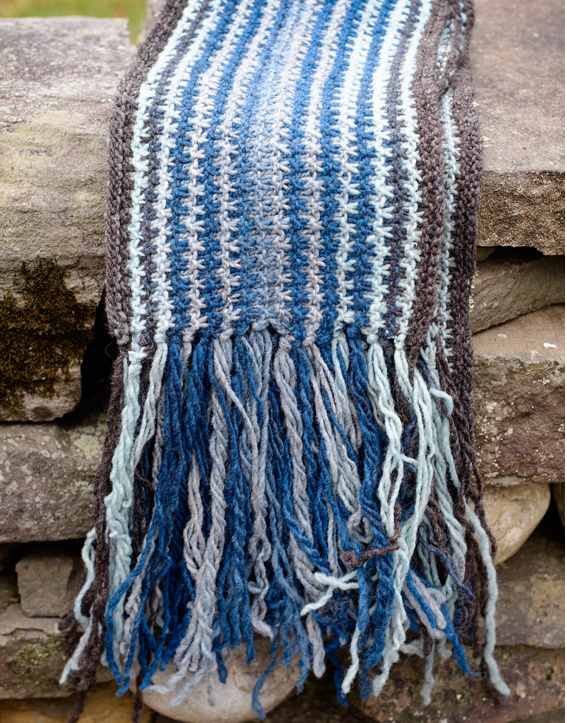 * Every November I attempt NaBloPoMo but despite good intentions, fall short.  Me+Rules = UNlikely To Follow. So I number my posts for the month and do what I do. .

** The three authors of Drop Dead Easy Knits--Kirsten Kapur of Through the Loops, Mary Lou Egan, and I- committed to blogging about each of the patterns in our book. If you visit our blogs, you'll find the posts. I said I'd do it in limerick...so...I haven't slipped up yet.

*** I cast on for  Grand Central in Rifton, too, but idiotically decided to work it from both ends, for the stripes, rather than just knit through it. About halfway in I realized my folly: I had a frustrating tangle from the two end knitting (so. not. easy.). Plus, Jill had spun this yarn so the color changes repeated, her colors were so thoughfully and gracefully appearing yet  I was ending up with matching sections instead of stripes....It was not working. If you use a color changing yarn, just go straight through it and let the dyer do the heavy lifting.

Posted by gale (she shoots sheep shots) at 4:57 PM

I think I worked from both ends, and took out some of the brown because it was bumping into itself.

Next time I will work out a way to make those knots in the knitting so the persnickety cannot call me out. ;-)

I have to say that some of my fave patterns are in this book! I just need to actually try some of them instead of just looking ... :-)

Wait... what? Rifton! OMG, I love that! I have a skein that has simmering in my stash as I have not known what to do with it! But!! THIS!! Oh man! It is speaking to me!

Lovely shawl, and it does sound drop dead easy!

So. Cool. I love it! I want one! Looks like perfect mindful knitting to me. XO
(I think it's best to hold on to "structure" lightly - especially when it comes to committing to anything done "daily." Because life and all that.) :-)
(I am rolling my eyes at the persnickety. . . )

I love the way you matched the color of the reflection in the sunglasses in the second photo to the one of the colors in the scarf ;-) That was totally intentional, right?