Here it is , one day past Chanukah and I haven't even mentioned gift knitting. Which is not to say it hasn't been going on. 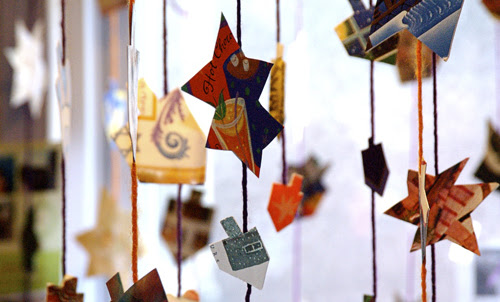 When my guys were little, we made dozens of these strings - yarn with recycled holiday cards from the year before. It got to the point where we had so many you'd get tangled walking through the house during Chanukah. Now we just use a couple dozen a year hanging above the kitchen table and window by the menorah. Some of the Xmas cards with religious themes cut into dreidel shapes are deliciously subversive.

Sister Lulu received socks from me, on the first night, when we had our Iron Chef Latke event . 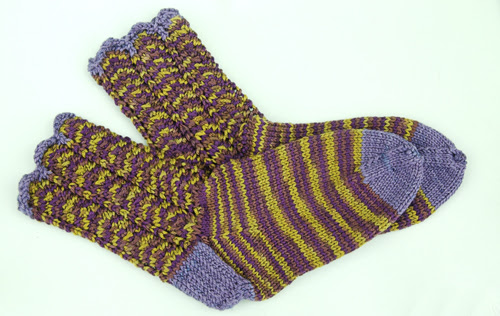 Pattern: Inspired by Miriam Feltons Razor Shell socks, these are instead knit over 48 worsted weight stitches. You can razor shell on any multiple of eight. I used the heel flap, toe and foot shape in stockinette I always use because , well, I just always do.

Needles: Size US 5 needles , or possibly US4. Just do a gauge swatch if you knit'em, OK?.

Yarn: Artyarns Supermerino , worsted weight, in # 114, an olive/moss/ eggplant/grape colorway that screamed her name. Toes, heels and cuff edge in another Artyarns Supermerino almost solid color, I think its 236. I've already sworn allegiance to knitting worsted weight socks this winter so I won't go there again. I love these, they are the shining achievement of my short sock knitting career.


On the third night she called to say she loved her socks so much she was tempted to wear them around her neck. The funny thing is, all along I had an extra skein of the yarn and planned to make a little scarfette with buttons for Lulu , along with the socks. It was a bit of a joke, we'd had a debate whether buttoned neck scarfs were fresh and cool (her opinion) or uptight and fussy (mine, although I may be wrong. There. I said it.) 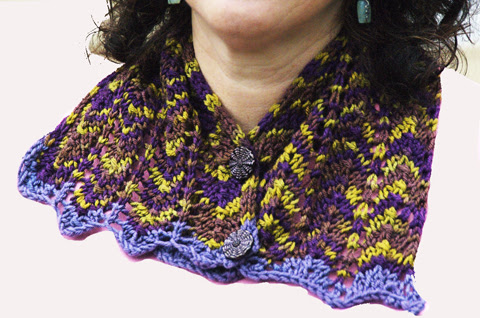 On the fifth night, Lulu got the hastily finished other part of her handknits, this neck scarf.
I improvised with the same yarns, and the Razor Shell stitch again. Its a one-skeiner, if you're not counting the small amount of contrasting yarn on the ends.

Pattern:
In CC, cast on 22 stitches on size 8 needles. 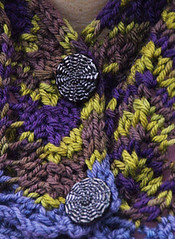 Sew on antique buttons that you want to show off since they're featured by the style, try it on to find placement. No buttonholes needed since the lace accomodates the fastening.

Let me know if you try following these instructions, and show me the results!

Posted by gale (she shoots sheep shots) at 4:53 PM

GREAT post!! I love the Chanukah decorations. I may have to steal that idea for next year.

I'm so glad you keep reminding us about worsted weight socks. I need a pair.

And I'm quite taken with the scarfette. I think I could wear something like that, but I couldn't call it a "dickey." ;-)

Your sister is very lucky!

I'm with you on the scarflette, but maybe I'm just not fashion forward enough to pull it off. ;-) I LOVE the colors, though.

Note to self -- check out that large stash of Cascade220 Superwash for last minute sock knitting. Scarfette? I'll let you know.