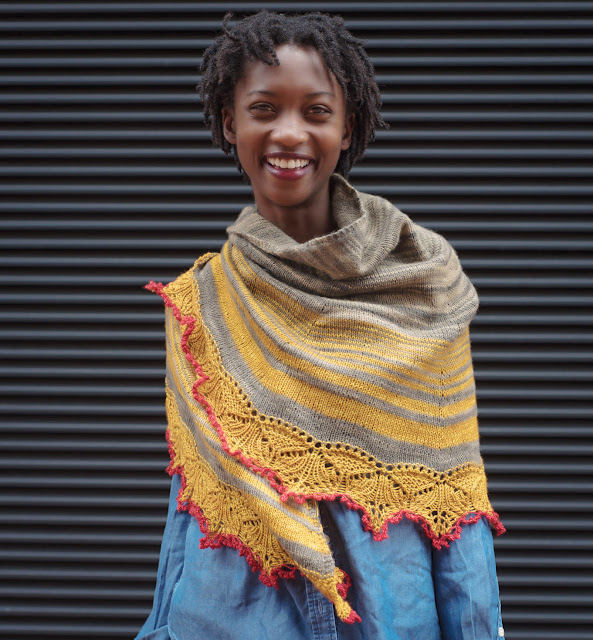 .
Once upon a time (2013) , in a land far far away (Nashville), I succumbed to a spell cast by a dyer (Denise of Lost City Knits). Although foresworn to never buy single skeins just because they are pretty, especially never if they look questionable next to  my skin, the spell was strong.  A skein of yarn, so soft, so golden that it glowed, bearing the fairytale name Rumplestilskin came home with me. The skein lived happily. Though not ever after. 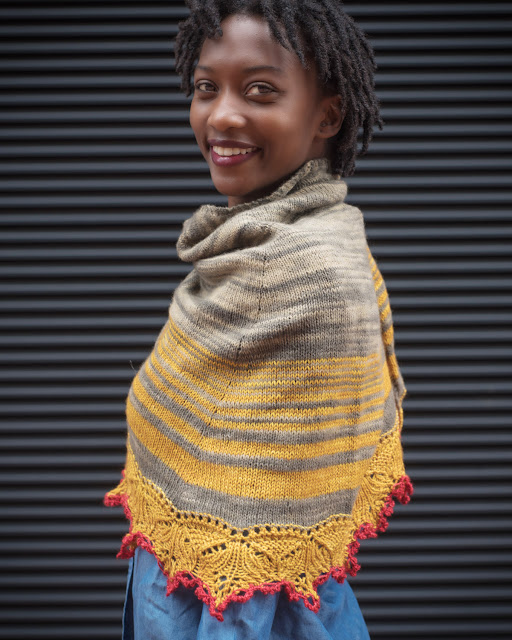 Peering deep into the bottomless pattern wishing well (Ravelry ), I was entranced by  Cladonia. So many Cladonia shawls, some solids with contrasting lace trim. My gold could be the trim, and cast no sallowness on my flesh! But what yarn was worthy of the golden skein?
Two months later, I was teaching at Fiber College of Maine, near Swans Island Yarn, with its busy fairy dyemothers. I was overcwhelmed with options in their shop,when my fellow teacher Kirsten Kapur herself, selected a yellowy grey and declared it the Cladonia-est in all the many shelves. (She later admitted she was just worried about time and chose it randomly- but I like to think it was alchemy.) 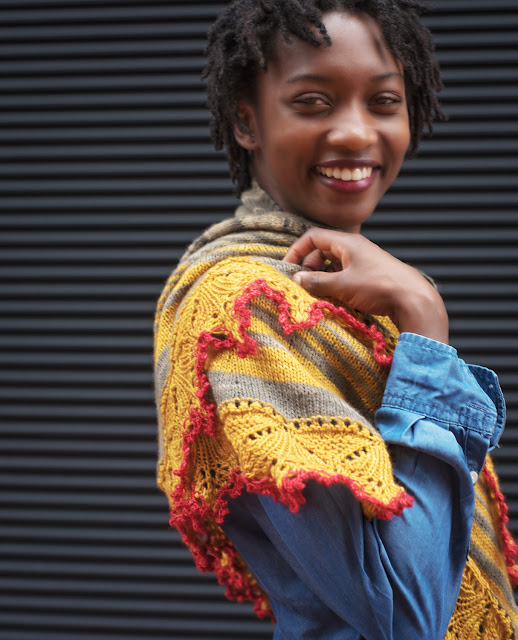 When 2014 rolled around, I cast on, taking my shawl WIP  far and wide. The shawl went back to Maine, to the Hudson Valley, to New York City, to Indiana, Vermont, New Jersey, to Delaware and Washington and Long Island and Rhode Island and Nash Island... . So many many islands..though none tropical, which made the shawl very very sad...oh wait, that was ME ......... 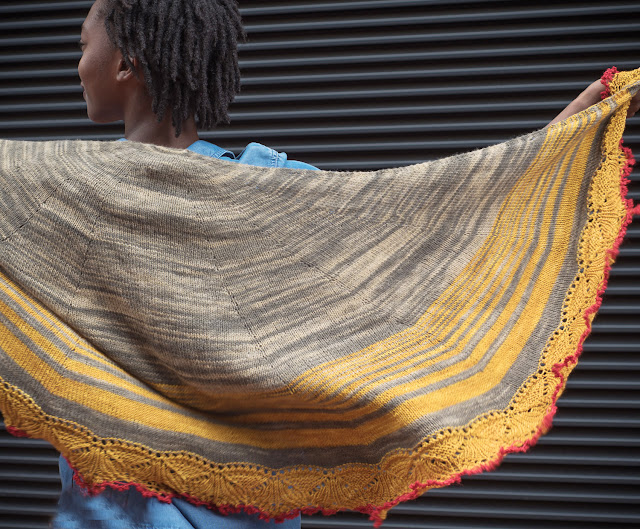 Cladonia became The Project to Work On Between Other projects.  I tired of grey, breaking out the Rumplestilskin for stripes.  In 2015, the Cladonia had a no-growth spell. I knit, it stayed the same size.  In  2016, the Cladonia grew and grew. If not the fastest Cladonia, then maybe it would be the largest one in all the knitting land.

I crossed the enchanted eyelets row between stockinette and lace border in May. It went quickly, buoyed by my fairy knitting god mother (the designer herself) who reassured (knocked me upside the head)  when I had my inevitable freakout on the 14th of 16 lace rows, that row 3 looked weird and maybe I should rip it all back.  Kirsten pointed out that the stitch count and pattern would be a hot mess if I had skipped YO's.   (DUH!) 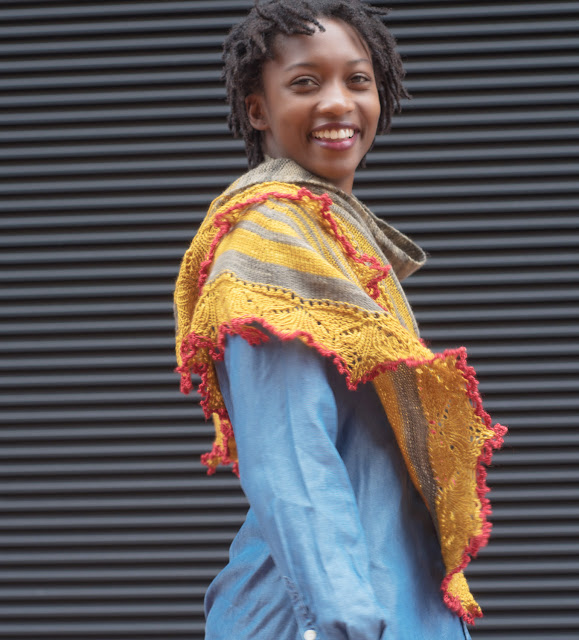 Posted by gale (she shoots sheep shots) at 3:53 PM

Oh, Gale. It's stunning and I adore the color combo you used!

It turned out beautifully! I like the fairy tale with a happy ending. Plus, modeled by a gorgeous princess!

Good Golly, I need to make one now. It's a winner. Also, do you take some kind of memory supplement? I need to know what it is ... it's working as well as the shawl.

Just GORGEOUS! I love the way the "cast off color" looks like it's just . . . dripping . . . off the edge. Love. (I also LOVE Lost City Knits! She pops in for the Michigan Fiber Festival - usually; I hope this year, too - and I can never resist her yarns!)

Happy accident, running out of yellow and finishing with that gorgeous red! Love it!

I love it, Gale! The striping, the color combo. So awesome!

Love love this whole thing--yarns, shawl, model, your Grimm's Fairy Tale! I am so into shawls at the moment--the perfect testing ground for just about everything.

It wouldn't be my first choice to add a red a shawl with grey and yellow. But seeing it on your photos, the red spices it up. I like it. Great job!

That is FANTASTIC!! Excellent use of leftover yarn... and what a wonderful color!

this really is a fairy tale knit.....gorgeous!!!! and what a great save with that left over (I never throw anything away, either!!!)