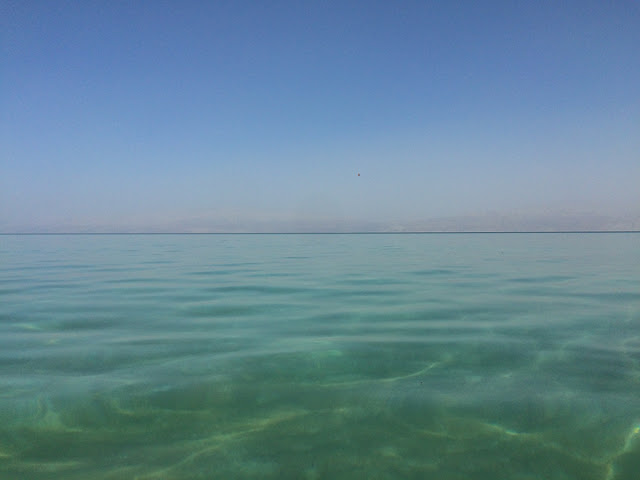 Part 1 here, if you missed it.  Love these colors.
When we were planning-and I use that word pretty lightly-our 8 days, the Dead Sea was a must.  It's a short-ish ride by local bus from Jerusalem- about 1.5 hours south, all downhill into the desert, and close by Ein Gedi, the oasis nature reserve. Day trip! 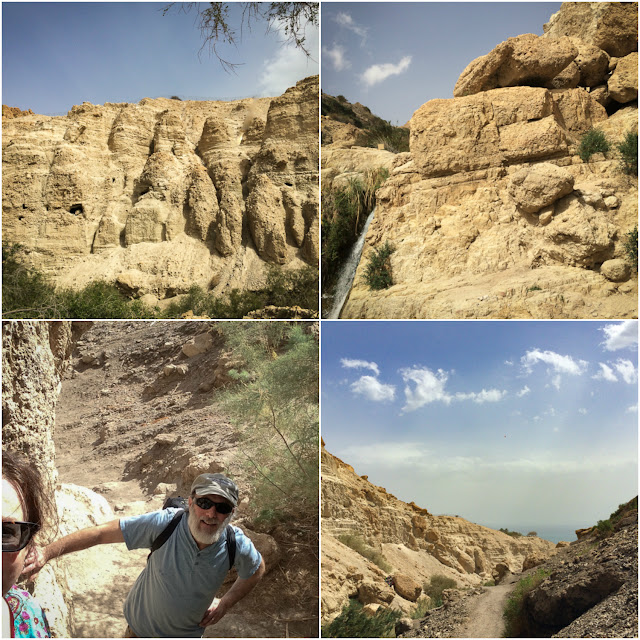 We suck, I mean really truly, at selfies. I just can't bring myself to get a stick. What I was trying to show, above on the left,  is the view behind us on the trail,that you can see on the right. Climbing on the trails along Wadi David in Ein Gedi, there's the Dead Sea in the distance. On the far shore, in perfect geographic symmetry, is Jordan. 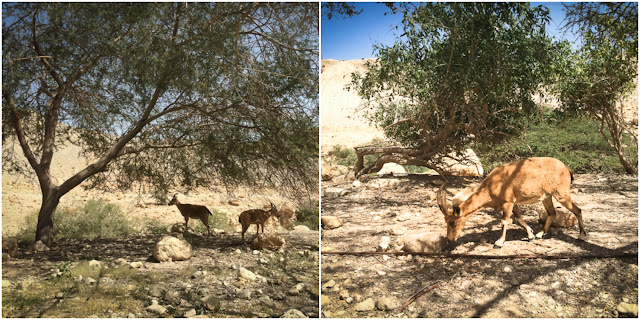 The whole time we were hiking, I was worrying about ibex.*  They used to be elusive. In 2016,  there are so many hikers along the improved trails, in big loud groups, that I figured no way would I see any. As we got back to the trail head, near the entrance and visitor center, the ibex appeared, grazing near the irrigated trees. 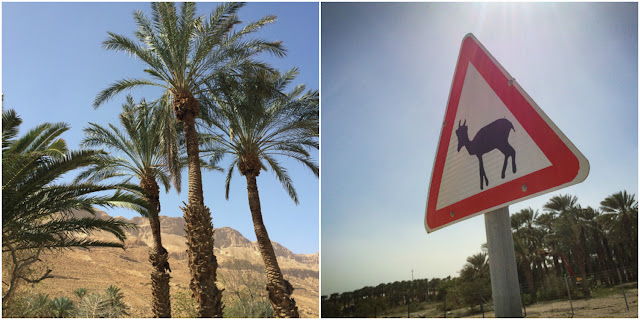 And, an ibex crossing sign near the highway, so maybe not so elusive anymore? Also, date palms cultivated by Kibbutz Ein Gedi, as we left the nature preserve and headed for our second activity. We'd misunderstood proximity, (cough, internet advice, cough) and tried to walk to the nearest beach on the Dead Sea. I wish I had a picture of what two idiots walking down the single highway in the desert at the lowest place on earth looked like. No beach in sight--and you can see pretty far. Happily, an out-of-the-blue cab came flying up the highway. No idea why except divine intervention. Dave had the presence of mind to wave him down for a ride to the beach several miles further, that we'd been aiming for. 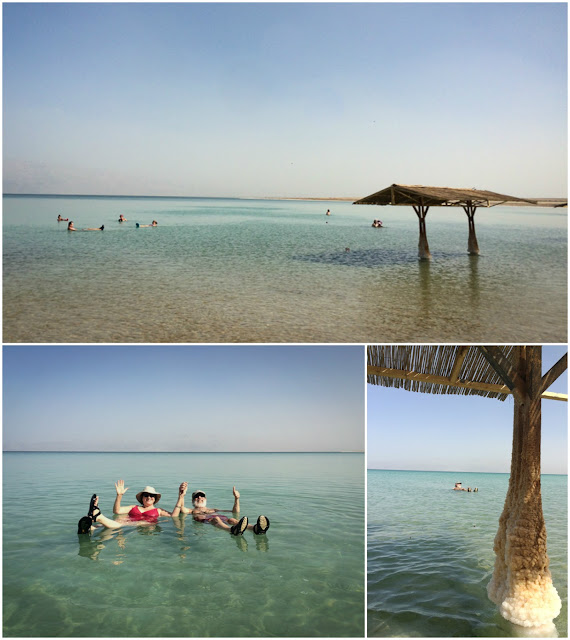 It is other worldly. Vast, clear, aqua, smelly, and so salty and mineral laden that it's thick. If you are a swimmer, and try to do what comes naturally, the water throws you off balance, and you simply can't swim. People literally sit on the water and read magazines. In the photo on the left, we are in chest deep water. Just chilling, looking at the desert mountain to the west. As you do. 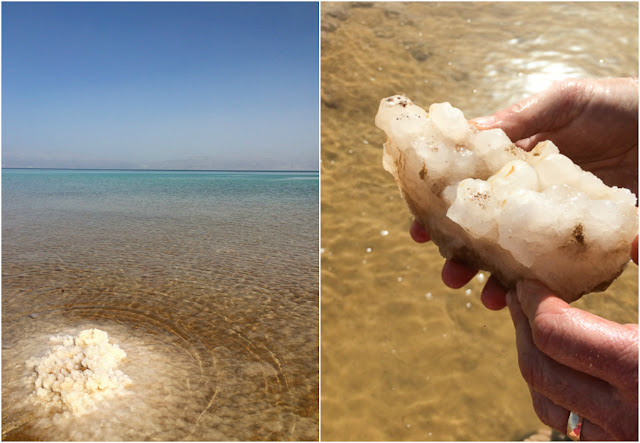 The ground is salt crystals, not sand. The air can be scorchingly hot, but it was only in the low 80's F (cold snap!) so we were two happy floaters, doing our healthy soak. 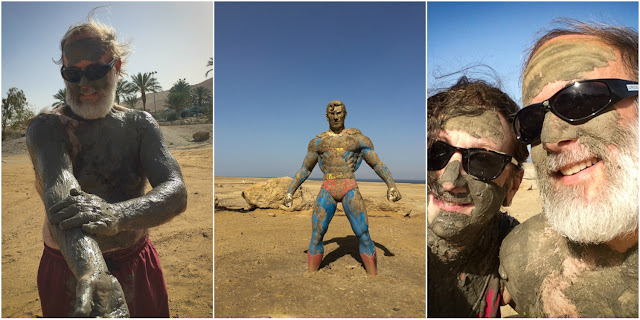 We finished off with the traditional mud bath. It's possible to scoop the mud right off the side edges of the beach but since we were at a "spa" beach, it had been thoughtfully piled into large metal troughs. Mud bathing was in an area with rocks and chairs we could lay on to bake in the sun, while enjoying the view of fiberglass Superman and Elvis, also mud covered. As if the Dead Sea isn't weird enough? Apparently we like mud when we travel- until we were slathering, we'd forgotten that our last international trip included a mud volcano. (scroll down to get to the mud. You can't miss it). Is Mud Tourism a thing? It should be.
The Dead Sea mud has thousands of years of reputation. Good enough for Cleopatra.  Final step was washing off in hot, extremely smelly powerful sulfur showers, located just to Superman's right.  And then, regular sweet clear water showers inside the building, before heading out to the road to catch the local bus back to Jerusalem before dark.

Knitting? Yes, of course I had a project that was carried with me all day. It never came out of my bag! Too much to look at along the way.
Part 3 soon. I have this crazy idea I might blog every day this month. Or try to. Though it won't be more than another day or two about the trip, it'll be back to the usual fibery and photo blab.

* In re-reading my post, I have decided that I need to live a life in which a sentence like this is used more often. A girl's gotta have goals, am I right?

I know a selfie stick is a dorky thing but they really are useful. I promise. Anyway, love hearing more about your adventures, I can't really picture what that water must be like. So cool.

Trying . . . just trying . . . to get my head around that water! (As a lifelong swimmer, I can't imagine being in water . . . and not being able to swim.) What a beautiful part of the world. Thanks so much for sharing your trip. (The mud Superman. And a mud Elvis. On the Dead Sea. Wow. Who knew???)

Our Great Salt Lake has been compared to the Dead Sea, but I think it is even more amazing (and smelly). Thank you for sharing the beauty of the desert and sharing your trip with us.

I know a selfie-stick would make things easier, but I can't buy one either... can't tell you how many times I've picked one off the shelf only to put it back. :)

Great photos! I was in Israel a long time ago, and also "swam" in the Dead Sea. Recently I was looking at the lump of salt I brought back, and thinking that it doesn't look like much, but triggers such memories.

1. Yes, the color.
2. Yes, worrying about ibex would be lovely to have to do on a regular basis.

Thank you for sharing your trip - I would love to visit Israel someday! I am looking forward to your next post!

What amazing colors! And yes, one should strive to live up to the Ibex sentence. Or add it to my sister's collection of odd sentences. Like "what are the neighbors doing?" "Learning to juggle thru their car".

looks like heaven! such pretty pics. from your description i'm imagining the water sort of like clear blue-green Jello...

I think Short Beach needs a mud "spa". You and Dave can spend your days wearing Elvis and Superman costumes covered in mud.

Each photo is simply gorgeous. What an amazing trip.