Have I ever mentioned that I like to look back over the past year to see if any themes emerged, and set an intention for the new one? 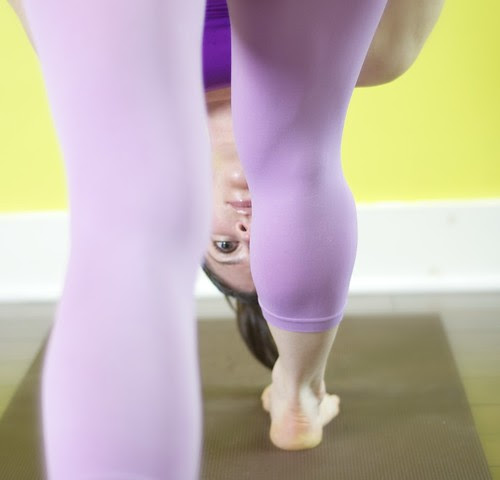 2011's was Embrace the Unexpected. On New Year's eve 12 months ago,  I thought I was downing a tumbler or two of organic cranberry juice but it turned out to be evenly mixed with tequila. whooooeeee! The year followed, rolling out in unexpected and often delightful ways, though sometimes with a slightly painful hangover.
(Awkward segue warning)  F'rinstance I didn't plan to get into a blogging groove and then suddenly drop it.  I'm jumping back in with a Wednesday Wip. On Thursday. Because, guess what? I finished That Reindeer Hat.  And in Tangerine Tango, the color of the year, no less.* 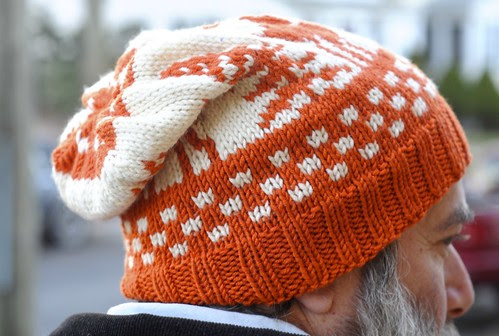 About the Fornicating Reindeer pattern:  first, it's a chart. BYOP(attern).** I went with a generic 96 stitch hat, 2x2 ribbing over the ears ,  squared off top, so there'd be some slouch. I improvised  a checked bottom section and diagonals on the crown. The rest was the chart. It's been ages since I knit colorwork. I totally enjoyed it. Note to self: move Sleight of Hands mittens and Muckle Mitts up the queue. 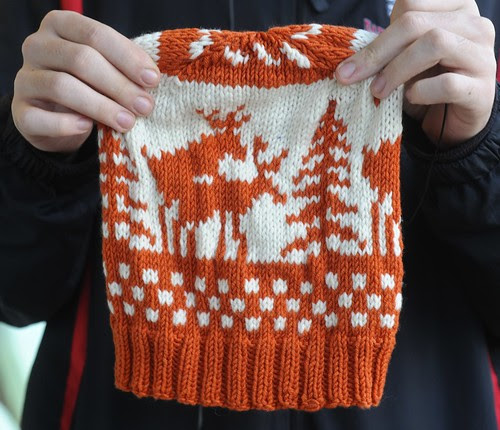 Second thing is Reindeer can't Fornicate ***. On the bright side, your reindeer can be randy, screwing, mating, making whoopy, f*cking ... whatever the verb, you'll want to block the hat so the graphics look nice, and not puckery off the needles. 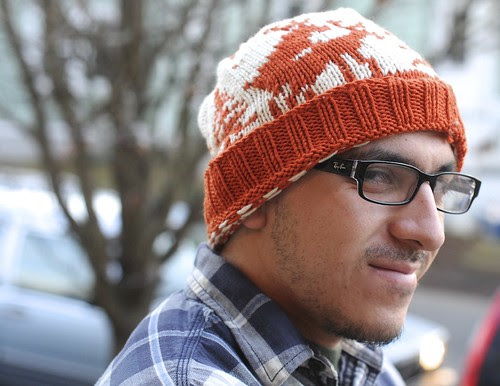 It turns out Leo wanted a closer fitting hat, and put it on his head like this. I offered to redo the top  and make it shorter. 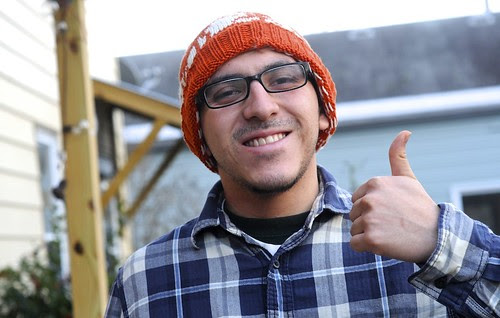 But he said he's happy as is.
This is one of those zen moments of being a knitter and a parent.  He'd just said 'I really like how the yarn going across looks".  Of course I wanted to grab it and say " you can't wear it with stranding peeking out like that."  But I replied "yay glad you like it".
I mean, here is a loved one appreciating a handknit, and it's got reindeer doing it, is anyone going to notice how it's folded up?
• • • • • • • • • • • •
* Isn't this aggressive  selling us  a color of the year ridiculous? Google the color and Pantone's flacking it all over the intertubes. What a weird consumer world we live in. (still, it's a shade of orange and I do like orange)

**If you too want to knit a version of this hat, I belatedly found a very nice (and undoubtedly warm)  pattern to go with the chart.  It's  reversible , so you can flash the reindeer or keep them close to your brain while revealing a SFW handknit. I can only imagine its usefulness in a dating situation.

***Thanks Kay for catching the ignorant use of the word. I had no idea it had legal connotations. I was sorely tempted to thank you for being my friend who knows a thing or two about fornication but that just seems tacky. Um, kinda like the hat.....
Check here for more WIP WEDNESDAY
Posted by gale (she shoots sheep shots) at 12:22 PM

I am very happy seeing your pre-blocking puckers. I just finished my own reindeer hat (G rated, thank you very much!) for my daughter. Black floats behind white -- bad idea (although they don't look quite as bad as they did when I was working on it). But she won't give it back to me long enough to give it a soak and let it dry all nice and smooth. I am waiting for another of those stretches of January spring days so I can steal it back.

That hat is awesome. I've long thought I should make one of those for Dale. I think I'd leave the antlers off the female, though, so that it just looks like deer.

Love that hat! And the orange.

Love the hat! Two of my three brothers would love one, the third would hide it in a drawer I think.
Found your blog after listening to one of Kelley Petkun's summer 2008 podcasts. Now I am eager to get Shear Spirit (I already have Craft Activism).

I love your fucking reindeer hat ;)

Can't actually respond, now that I've read Maryse's comment, as I am laughing too hard.

Oh Yay!!! I've been hoping to get to see the finished hat. It's so fabulous in tangerine and white! And I love that the antlers on both deer suggest they're friends of Dorothy!

And thanks for your zen lesson. So true. Namaste.

Just sitting here smiling at your post and the comments...

Maryse made me laugh out loud! Love the hat. And your commenters!

I, of course, clicked on the link for fornicate. Good hat and it's hip to show the back side of stranding these days.

When it comes to fornication, I've got your back.

Great hat. It's orange. Tangerine Tango is a Snapple flavor.

Well there's an idea for my next pattern - our sheep fornicating. Don't think my fans would go for it. Did I ever tell you about the time I had a group of knitters here for a weekend and out in the pasture - there was a group of 15 ram lambs going after one poor little ewe who was in season. It was quite funny. I told them that is life on the farm.

Great news about the grandbaby! Congrats. Teaching at Webs in the a.m.