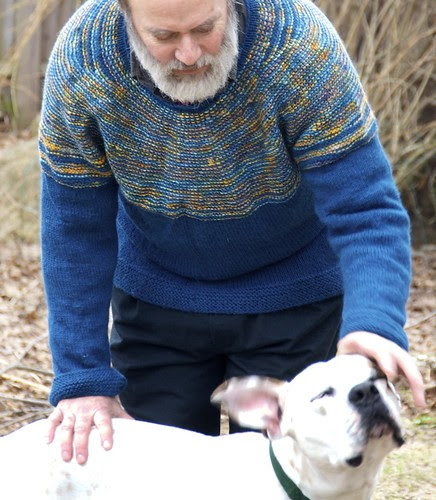 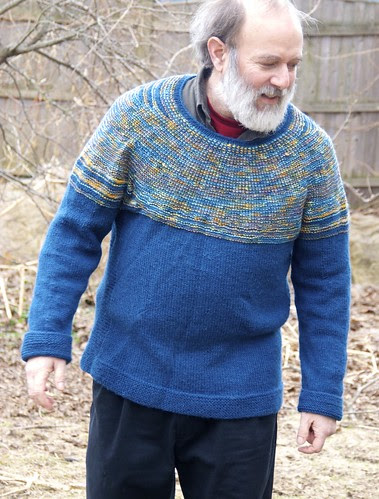 It was finished a month ago. The thing is, Dave doesn't like posing or the attention one gets in front of the camera. I know! cruel irony! Spending his life with a photographer. To make matters worse, I never feel Dave looks like himself when I shoot him, so I say, nah, not quite right, I didn't get you.  Who's this dude with a white beard who's showing up in my pixels. 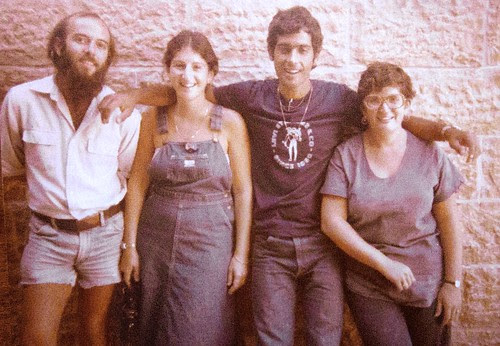 This is the Dave I think will  appear in the photos.  I realized the problem is not with Dave's posing  but with my brain,  two weeks ago, when dear friends showed this photo of us in 1981.  Delusion! such a grand way to face the world.( Also: denim, such a wardrobe builder.) 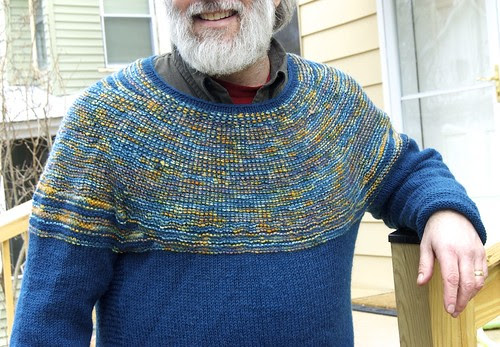 FYI, I knit the Potosi Sheep Farm yarn every other row on the garter yoke, to mute contrast with the solid blue. I crisped up the detail in this image to talk about it, but it's a softer effect to the naked eye. What I didn't think hard enough about was the the short row areas.  You can see stripes by the lower yoke on the arm, and  in arm pits as blue wedges. I don't mind them much, though.  And in person? It's kinda like the beard color, you really just don't see it.
Posted by gale (she shoots sheep shots) at 1:47 PM

Look how much fun that dog is having!

both project and model look great. I applaud your patience with the yoke.
well done!!

Memory has a way of fooling us and time has a way of messing with us! The sweater looks fabulous and my guess is Dave will wear and love it for many years to come!

Oh yeah, the brain edits it all out until the camera shows the truth. Truthiness out!

Love the vintage photo of you guys. Dave looks nice with the white beard though and very cute in your Cobblestone. I know what you mean about the mental image thing, why do I still feel like I did 20 years ago?

What a fabulous sweater! I love the way you've changed the look of the yoke by alternating the blue with the hand-dyed. The hem and sleeve endings look especially nice too. You're really convincing me to try a cobblestone. It's great to see the vintage picture too. Thanks for sharing it all with us!

"Cobblestone" looks fab on Dave. The colors are amazing with his twinkling eyes!!

My Dad always used to say that youth is wasted on the young. Such a wise man!

gosh, what a beautiful sweater!

and i totally get what you mean about the grand divide between photos and one's image on oneself. i wonder where the "truth" lies...

This is why people need to stay with people who know what they really look like. (Said the girl who is on vacay with her college friend from 1978). Just love this post on so many levels but the snort-inducing, too close to home line was about denim the wardrobe builder.

Hey! It goes with everything!

What a nice effect with the colors. I actually thought the wedges of blue were consciously chosen design elements - they look good!

Ah yes, in the old picture, that's exactly how I remember you two from our time spent together in Israel.