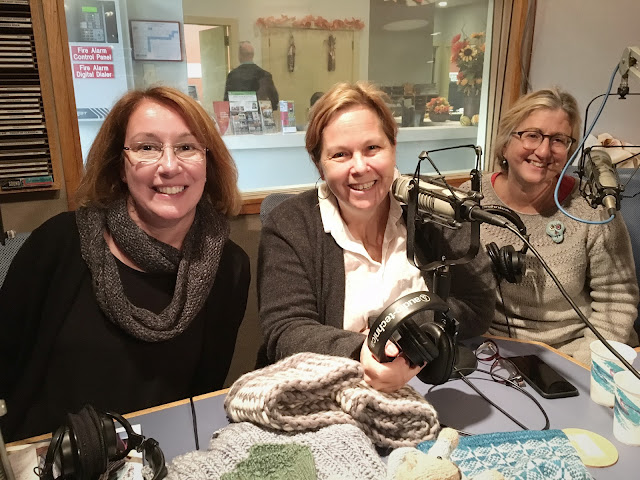 You can hear it here !
Turns out it was the 10th Anniversary show. What an honor! This is the "after" shot inside the recording studio at WHMP.   I am a little bit -

Kathy Elkins is such a pro, and fun to talk to,  she put us both at ease.  The engineer made our voices sound so smoooooooth. Kathy totally "gets" our book, it was a joy to chat about the projects and the process with her.
Followed, of course, by a little shopping excursion to her famous store. But that is another post!

PS apologies for the quality of these photos. No real cameras --only the phone and the dim/contrasty radio station studio lights. Too bad our third partner in knitting book crime, Mary Lou Egan wasn't along.

*AV Club- so this is no longer a thing, since classrooms all have TV screens and if a class watches a movie, it's on a dvd or streaming, and everyone knows how to access it.  But before that...AV Club was a group of kids who got trained to run the film projectors, filmstrips and troubleshoot the overhead projectors, and had a vest and belt with a ton of keys to get the equipment from a closet and roll it on a cart into the classroom.
The namesake-The AV Club website reports on pop culture, it  is worth a visit for entertainment.  Just thought I'd throw that in.

I didn't even know WEBS had a podcast. How cool that you and Kirsten got to be guests!

Wow, I am with Carole - I did not know that WEBS had a podcast! However, I will be looking it up to listen to your interview!

You were an AV girl! I love it.

The AV Room was EVERYTHING!! :)

But did you get to run the mimeograph machine?!?